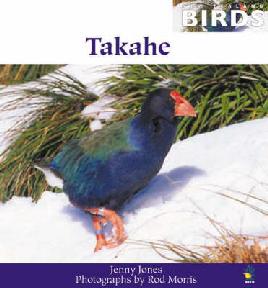 The takahē was believed to be extinct at the end of the nineteenth century, but was rediscovered by Geoffrey Orbell in Fiordland in 1948. Fossil remains have been found in both the North and South Islands, but numbers of takahē were probably never very high. The present-day population lives in an area of just 500 square kilometres, in the Murchison Mountains in Fiordland.

The takahē has similar colouring to the pukeko, with purple-blue-green feathers and distinctive red legs and beak, but is a larger, flightless bird, weighing 3 kilograms and standing about 50 cm tall. The takahē's wings are not too small for flying but they are used during courtship and to show aggression. It is the largest living member of the rail family of birds, and its closest relative is the much more common pukeko.

Takahē in captivity have lived for up to 20 years, but few birds survive this length of time in the wild.
Its main source of food is tussock grass, but because of competition for the grasses from increasing numbers of deer during the 1940-50s the numbers of takahē declined, reaching a low of 118 birds in 1982.

The takahē eats the bottom juicy part of the tussock grass for the sugar and protein it contains. When supplies of tussock grass are limited by heavy snow in winter, takahē move to lower areas of forest and feed on fern.

The tussock grass is also used for shelter when a takahē pair builds a nest after the snow disappears. Up to three eggs may be laid, but usually only one chick survives the following winter. Both takahē parents share the incubation of the eggs, and also the feeding of the chicks for the first three months. One reason for the poor breeding record of the takahē is that many of the eggs laid are infertile, possibly the result of having a population which is too closely related.

Attempts to increase the takahē population been made with the establishment of a captive breeding programme which takes takahē eggs, and hatches them, and then rears the young birds until they are able to survive in the wild. As part of this process, handling by humans is avoided as much as possible. Instead takahē puppets and dummies are used as "parents".

The takahē's source of food, alpine vegetation and tussock grass, has recovered with the control of red deer numbers. Research is now being made on the impact of predators such as stoats on the population of wild birds.

"Mast" years also have an impact on both the takahē and its predator, the stoat. These years are when beech trees produce a heavy amount of seed, and provide more food for rodents and, in turn, stoats. When the number of rats and mice drop, the increased stoat population look to native birds for food.

A number of breeding pairs of birds have also been transferred to off-shore islands Maud, Mana, Kapiti and Tiritiri Matangi, to increase the takahē's chances of survival. There are now about 220 takahē alive in the wild, and another 50 in captivity.