Soulful singer-songwriter Bic Runga, born and raised in Christchurch, is coming back to her hometown for a 20th anniversary concert celebrating her first album Drive, on Friday 20 October at Issac Theatre Royal. 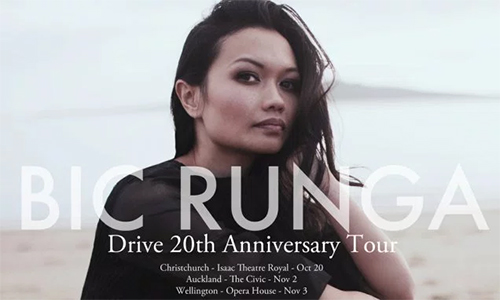 She will be playing her much-lauded and loved songs that have stood the test of time such as Sway, Suddenly Strange and Bursting Through, alongside songs since then, included in The Very Best of Bic Runga (released 2017).

There must be quite a few of us who, in their 20s, would have filtered their relationships and emotional experiences through the lyrics of Bic Runga's songs when the album was first released, and sang along to Drive, while driving around. Her music has cross-generational appeal and now I don't know who is the bigger fan, myself or my daughter, but we'll both be there up front in the majestic theatre to sway to her beautiful and equally majestic voice.

We caught up with Bic for a few quick questions ahead of her concert in Christchurch. She shares her reading interests and formative library memories.

Bic, you grew up in Christchurch, in Hornby, and went to Cashmere High School… what special places do you think of fondly here?

My favourite places are the Arts Centre where I did a lot of hanging out as a teenager. Lyttelton and Governors Bay are also really special places to me.

What role did libraries play in your life growing up?

I used to catch the bus to the library in town most Saturdays, and I discovered all the music I love there. I used to get out cassette tapes and that's where I discovered The Smiths, The Sex Pistols, The Cure, The Cocteau Twins. It was unlike the music my parents played at home, so it was really my own place.

What type of reading do you enjoy? Any recommendations? What are you looking forward to reading?

I like non-fiction. I like science books and I love books about space! And I like music biographies. I liked Patti Smith's Just Kids, and I love Marianne Faithfull's autobiography Faithfull. The Phil Collins' autobiography Not Dead Yet I've heard is really funny, I'll get to it soon!

Are there any special books or stories you remember fondly from your childhood? And what books are your own children enjoying at the moment?

I remember reading the Ramona Quimby series (about 3 sisters) when I could first read a chapter book. And any of the non-fiction Usborne Books for children. Anything by Roald Dahl worked on me as it does my children now.

My kids are mad about Minecraft, there's an unofficial Minecraft book they quite liked called the Elementia Chronicles by Sean Fay Wolfe. So if you can't peel your child away from Minecraft, you could try the book!

Can you recommend any music or artists out of Christchurch who have taken your interest?

At the show at the Isaac Theatre Royal I've asked Asti Loren to sing a duet with me, she has such a beautiful voice. I love how self motivated she is, she posts a lot of stuff online and really does everything herself which is such a different world from my generation when you needed record labels and directors and stuff.

If a young person was interested in being a musician today, what advice would you give them?

I'd say just practice a lot, practice slowly and make it your meditation. Everyone wants fame, but it seems no one wants to practice enough!

We asked Bic to share a surprising fact about herself (and it may just be her next creative project) ...

I've just learned how to draft clothing patterns slowly over the last few years and I'm ready to do a fashion project, maybe using wool. I'm really excited to do something creative that's not music, but I think the two will work together well.

Finally Bic, you are donating money from every ticket purchased to your Christchurch show to the Māia Health Foundation, who are raising money for projects for Canterbury's health system. Can you tell us more about that?

I'm proud to be an ambassador for the Māia Health Foundation alongside (fellow Cantabrians) Jake Bailey and Brendon McCullum. It's still quite a new charity so I'm constantly trying to raise their profile in everything I do. Our main projects right now are a helipad as part of the hospital so the rescue helicopters don't have to land in Hagley Park 8 minutes away, and more beds for parents in the children's ward so families can stay together.

Bic has won a multitude of awards and worked on many musical projects and collaborations in the twenty years since Drive was released, too numerous to mention here. Most recently, Bic has written a song for a New Zealand children's annual of stories, poetry, comics, art and other miscellany Annual 2 which has just been published is aimed at 8 to 12 year olds. Her song, Next Thing You Know You'll Be Happy, is based on the idea that happiness comes from simple pleasures.

Take a look inside Annual 2

Buy Tickets: Friday 20 October, Isaac Theatre Royal
Listen: Bic Runga's CDs in our catalogue
Browse: Bic Runga's website
Read: In-depth background on Bic on Audioculture
Watch: Before she was famous, she formed the duo Love Soup with Kelly Horgan as a seventh former at Cashmere High School in Christchurch and they entered the Smokefree Rockquest Canterbury Finals in 1993, earning her first recording contract afterwards (see their performance of Superman Song from the 5 minute point in this video).