Charles Upham, New Zealand’s greatest soldier and an internationally renowned war hero, is one of only three people to have received the Victoria Cross twice and, remarkably, the only combat soldier to have achieved this.

This year marks the 25th anniversary of his death on 22 November 1994. Although Charles Upham always shunned the limelight, and even claimed that others deserved the accolades more than he did, his name is still synonymous with the very best the New Zealand army offered - resolve, courage, and humility. Upon King George's observation that the addition of a bar to his cross would be 'very unusual indeed', he asked 'Does he deserve it?' to which Major-General Kippenberger replied: '‘In my respectful opinion Sir, Upham won the VC several times over’.

Born in Christchurch in 1908 to lawyer John Hazlitt Upham and his wife, Agatha Mary Coates Upham, Charles attended Waihi School from 1917 to 1922, then Christ's College from 1923-1927. He earned a Diploma in Agriculture at Canterbury Agricultural College (now Lincoln University), and worked on Canterbury sheep stations for the next six years before becoming a government land valuer.

On the 18 September 1939, Charles enlisted in the Second New Zealand Expeditionary Force, aged 30. His natural tactical and practical skills saw him quickly promoted to lance corporal then sergeant, and upon embarking to Egypt, he was selected to join an Officer Cadet Training Unit. However, hugely dismayed by what he considered outdated ideas, he passed at the bottom of the class. Charles was subsequently sent to command the West Coast Men of the 20th Battalion, then at the beginning of 1941, was posted to Crete. Here, General Freyberg, and soldiers like Charles, were met by a shambolic withdrawal from the allies, and a severe shortage of weapons, despite the divisions order to defend Crete. The Register of the Victoria Cross describes Charles valiant actions during that time:

"Between 22 and 30 May 1941 in Crete, Second Lieutenant Upham displayed outstanding leadership and courage in very close-quarter fighting. He was blown up by one mortar shell and badly wounded by another. He was also wounded in the foot, but in spite of his wounds and a severe attack of dysentery, he refused to go to hospital. He carried a wounded man back to safety when his company was forced to retire on 22 May, and on 30 May he beat off an attack at Sphakia, 22 German falling to his short-range fire."

However Charles was greatly distressed upon being selected for the Victoria Cross. It was only upon being persuaded that the award recognised the courage of the entire unit, that he could somewhat cope with the unwanted medal and the unwanted attention. 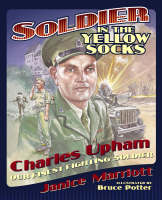 After Charles again demonstrated his fearlessness and unwavering loyalty towards his men on Ruweisat Ridge (staying with his 6 remaining soldiers until the bitter end, despite severe injuries and exhaustion), he was captured by the German army. Labelled as 'dangerous' due to his many attempts to escape, Charles was transferred from a prison camp in Italy to Colditz Prison. Here, Charles continued his efforts to defy those guarding him. One set to with a German officer, in which he threw down his identity disc, then refused to pick it up, nearly saw the end for him. Biographer Kenneth Sandford describes the scene:

"The German officer finally gave up speaking, drew his revolver, and cocked it, then advanced on Upham and pressed the muzzle against his stomach. 'Pick it up' he ordered for the last time...
For a long twenty seconds he stood there, eyes blazing. Then defeated in the face of death, he relaxed, bent down, and picked up the disc, handed it over. He made it appear however, as if he were conferring a favour".

Though impatient to return to action after the liberation of Colditz, Charles was sent to Britain and to Molly McTamney (the love of his love who was currently serving as a nurse there). The couple were married on 20 June 1945. At the end of the year, they took up sheep farming on an isolated farm by Conway River, North Canterbury, where it was said that Charles allowed no German machinery to enter. They had three daughters, Amanda, Virginia, and Caroline.

To his dismay, Officers of the New Zealand Expeditionary Force had been busily gathering evidence for his second Victoria Cross, largely from his efforts at Ruweisat Ridge:

"On 14/15 July 1942 at El Ruweisat Ridge, Western Desert, Captain Upham, in spite of being twice wounded, insisted on remaining with his men. Just before dawn he led his company in a determined attack, capturing the objective after fierce fighting; he himself destroyed a German tank and several guns and vehicles with hand grenades. Although his arm had been broken by a machine-gun bullet, he continued to dominate the situation and when at last, weak from loss of blood, he had his wounds dressed, he immediately returned to his men, remaining with them until he was again severely wounded and unable to move."

According to Kenneth Sandford, upon receiving the news of his Bar:

"Charles looked around for a place of retreat. There were reporters in the front hall, people waiting at the door, and so called friends demanding to speak to him on the telephone. He darted into the bathroom, locked the door, and looked despairingly out the window".

Eventually, Charles understated reaction was: ‘Naturally I feel some pride in this distinction, but hundreds of others have done more than I did. They could have given it to one of them’.

When he was offered £10,000 by the people of Canterbury to purchase a farm, he insisted the money be used instead for a scholarship to the children of returned servicemen.

It took the intervention of his former commanding officer, Howard Kippenberger, for Upham to give his consent to a biography: Mark of The Lion published in 1962.

Often, it took the intervention of the Prime Minister for Upham to attend celebrations and parades. Charles and Molly remained living on their farm until January 1994, when they retired to Christchurch. Charles passed away on 22 November1994 and was buried at St Paul's Church, Papanui, Christchurch. His funeral was appropriately carried out with full military honours, and over 5000 people lined the streets of Christchurch to pay their respects.

The tributes to him did not stop there. There is a statue of Charles Upham in Amberley, the Reserve Bank issued a $20 commemorative Charles Upham coin, and the Royal New Zealand Navy named one of their ships the HMNZS Charles Upham. There was even a memorial service to him in London during the V.E Day Celebrations on 5 May 1995.

"We should be uplifted by Charles Upham’s life, as much as saddened by his death... it is his steadfast adherence to a set of values the diminishment of which, in later years, greatly concerned him - loyalty, respect, justice, honour, and compassion for those in need, passion in the pursuit of what he believed in".

Detour - a book on the Colditz prisoners published shortly after the war - also contains this beautifully apt description of the man himself: