As part of this month's Christchurch Heritage Festival, Tūranga played host to Christ Church Cathedral: Our Place Our People where objects from the cathedral are displayed around the library.

The object that has particularly piqued my interest is the First World War grave marker of Second Lieutenant John Melvyn Watkins. He was killed in France on 1 September 1918, agonisingly close to the end of the war, and this cross would have marked the site of his burial in Bienvillers Military Cemetery until it was replaced in the early 1920s with the custom Portland stone headstone used by the Commonwealth War Graves Commission (CWGC). Such grave markers were returned to families after the war and many have been placed in churches. At some point this particular marker was donated to Christ Church Cathedral, as described by his niece Mrs Northcote in The Press in 1978.

In the heat of war the wrong initial was put on the marker - being noted as 2Lt T. M. Watkins, but documentation from the CWGC shows that this error was corrected before the final headstone was erected.

John was born in 1893 in Sydney, the son of John and Elvira Watkins of Merivale. Educated at Christ's College, he was a clerk for the Bank of New Zealand and a keen athlete, being part captain of the Christchurch Swimming Club and a member of the Christchurch Football Club (the Red and Black Association). He joined up in August 1914 and attended a Red and Black Association farewell event that month. He was also presented with a silver flask, fountain pen and leather pocket wallet on his departure, although the Press article mentioning them doesn't say who they were from.

Detailed information about his military career (although it does take a bit of deciphering) can be found in his digitised service records - some forms and documents and his full personnel file - from Archives New Zealand. He served in the NZ Field Artillery - the big guns - first at Gallipoli, where he was wounded and a bullet left near his spine, and then on the Western Front from April 1916 on. Interestingly he apparently donated a mummy hand - complete with attached flesh - to Canterbury Museum in January 1917. Presumably this was acquired while he was convalescing in Egypt. All this time he had been making his way up the ranks from Gunner (the artillery equivalent of a Private) to Sergeant. In 1917 he was commissioned as an officer after training in the UK and returned to the front late that year as a Second Lieutenant.

Also that year he married Dorothy Ida Mary Haywood at St Mary Magdalene Church in Upper Tooting, London. The newspaper report makes it sound quite a grand affair, with gifts of silver and a right royal send off for their honeymoon tour of Surrey.

Towards the end of the war in 1918 his unit, the 4th Howitzer Battery, became involved in the big push to end the war. On 1st September they attacked again, and as the artillery's official history (page 262) reports that day saw heavy casualties among officers, several, including John Watkins, were killed. Later that month he was posthumously awarded the Military Cross for gallantry in the field. 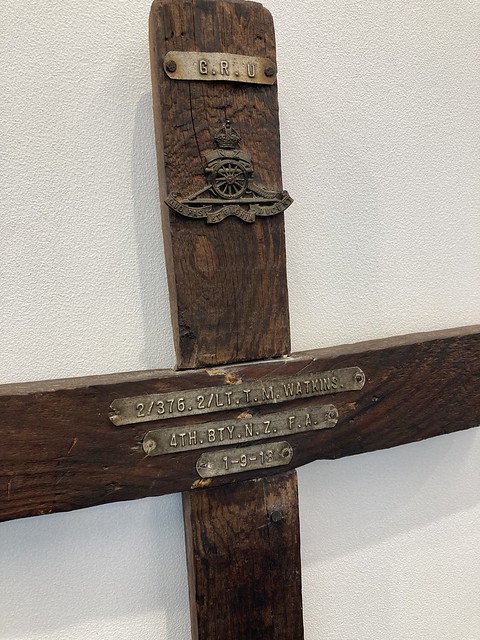 His obituary appeared in The Press on 25 September and the following day the Christchurch Swimming Club observed a motion of condolence with the family at their annual meeting.

That we are now able to display his grave marker here in Tūranga is testament to his family, Christ Church Cathedral and the unending work of the Commonwealth War Graves Commission.