We are following the footsteps of our ancestors….we remember

We, the film audience, packed into Christchurch Art Gallery’s Philip Carter Auditorium like sardines. With all 178 seats in the auditorium taken, a few stragglers were quietly seeking spare seats. I was silently congratulating myself for arriving fifteen minutes early. I’m not usually scrupulous regarding time, often throwing caution to the wind, but I had no intention of missing out on a seat. It was obvious the choice of this final film of the year by the Canterbury Film Society (CFS), in conjunction with the Parihaka Papakāinga Trust, was proving to be a crowd pleaser and I’d been waiting a long time to see it.

Before the movie screened we were warmly introduced to Parihaka kuia Maata Wharehoka who presented the film and informed us of the Q&A session she would conduct after the screening.

Tātarakihi - Children of Parihaka - is named after the tamariki of Parihaka. Known for the sound of their chattering, the tamariki have been given the name ‘tātarakihi’ (cicadas). They have a special place in the history of the village. In 1881 the children of Parihaka greeted the invading Armed Constabulary with white feathers of peace, in accord with the philosophy of passive resistance taught by their two leaders, Te Whiti o Rongomai and Tohu Kākahi. Although the film is not a complete full story, it gives us some idea of what took place.

The lights dimmed down, a cloak of anticipation wrapped us. What followed was a 63 minute, deeply moving, cinematic experience. The film highlights an emotional, modern day pilgrimage taken by tamariki of Te Kura Kaupapa Māori o Tamarongo. They, along with some of their elders, go on a road trip by bus from Parihaka to prisons around the South Island where hundreds of their ancestors were exiled and held captive. Parihaka men who were kept captive in often appalling conditions for nineteen years and forced to labour, constructing roads and buildings around Te Waka a Maui, the South Island. The tātarakihi also visit marae that took prisoners under their wing and urupā where tūpuna tāne are buried.

On their journey South prisoners were taken across Te-Moana-o-Raukawa/Cook Strait held captive in the hold of a ship. When the sea became rough, the ship was too heavy. Men were thrown overboard and warned they would be shot if they attempted to escape. Several drowned.

Back in Parihaka the Crown's abuse continued. Within weeks crops were destroyed, stock killed, homes blazed to the ground. The colossal land grabbing ogre was alive and ravenous.

As much as this brilliant movie is a tribute to the tūpuna whose lives were sacrificed and the Parihaka Survivors of Peace, it is also very much the children’s stories. Narrated by the tātarakihi, footage of their hikoi is interwoven with their poetry, song, art and narration.This film is an inspiring and successful undertaking which educates the viewer and informs the unknowing about a deeply meaningful aspect of New Zealand’s cruel history - the Parihaka story and Taranaki land Confiscations of the 1860s.

When the movie ended, the crowd sat speechless for a moment or two. Before the resounding din of clapping filled the theatre. The next hour was spent asking questions and having them answered by Maata. In the end Māori were called to the front. She shared that many of us would have had our own tūpuna incarcerated from Parihaka. A hīmene was suggested. The whole audience stood and joined in.

I left the theatre with red eyes. I suspect many others did also.

Since viewing 'Tātarakihi - Children of Parihaka' I've spoken to many people about the film. It's astonishing how many folks know nothing about the Parihaka story. In fact, not a single one I've spoken with.

Christchurch City Libraries offers several fascinating books, for both young and old, that relate to this piece of our history. One can even listen to some music.

Tātarakihi - The children of Parihaka is not available on DVD so can only be viewed at special cinema screenings. The next screening is at 2pm, Sunday, 5 November 2017 at Christchurch Art Gallery. No bookings, koha at the door.

Find out more about Parihaka 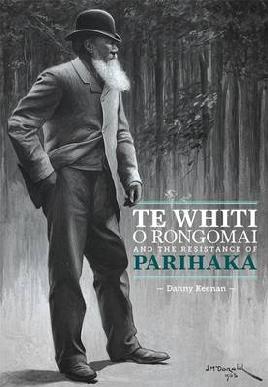