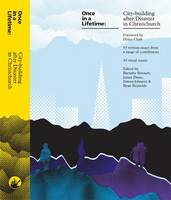 The team at Freerange Press brought you one of the best books of 2014 - Once in a Lifetime: City-building after Disaster in Christchurch. Now they come bearing Talking Heads - a series of talks that explore the current state of play in Christchurch and expand upon themes and issues explored in the book.

The first discussion - Talking Heads #1 - is on the topic of asset sales. Councillor Raf Manji will be talking with one of the book's editors James Dann.

Raf will be talking about how the council reached its decision to include selling assets as part of its response to Christchurch’s current financial situation (submissions for which close on April 28).

The talk is on Thursday 23 April 5.30pm at EPIC (96 Manchester Street, opposite Alices). James will also take questions from the floor, so you will get the chance to have your say.

Copies of the book Once in a Lifetime: City-building after Disaster in Christchurch will be available for $40.