A significant stand of tī kōuka (cabbage trees) grows proudly in the grounds of Burnside High School near the corner of Memorial Avenue and Greers Road.

This cluster of trees was known to early Waitaha and Ngāi Tahu as Te Herenga Ora and was used as a landmark by Māori travellers to help guide them from Rāpaki and Te Waihora through treacherous swampland to the Ngāi Tahu pā of Kaiapoi. 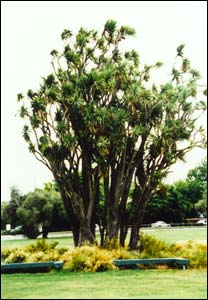 Travellers often used the area around these trees as a resting place.

A tapu character became attached to the site on account of sacred rites being performed there to ensure travellers a safe journey.

Te Herenga Ora was carefully fenced by an early European settler who had learnt from Māori of the trees’ significance. European settlers making their way westward in the early 1850s also relied on the cabbage trees to fix their position.

Although the original trunks of the cabbage trees died long ago new trees have sprouted in their place. The 12 metre tall trees are now a focal point for Burnside High School. As well as being the school’s motif they inspired the school motto: Recte sic dirige cursum meaning Along this path direct your journey correctly.

The resilient cabbage trees remain a signpost for those who pass their way.