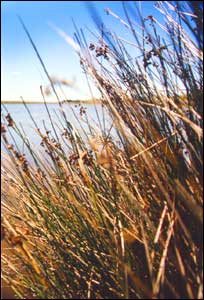 Otherwise known as Lake Ellesmere, Waihora is the large shallow lake which spreads from the western shores of Horomaka (Banks Peninsula) down to Taumutu in the south. It is separated from the sea by the extensive Kaitōrete spit.

Te Waihora has been a revered mahinga kai for Māori since ancient times and remains central to the lives of many Māori who now live in the area. Preservation of the lake and its resources is a major focus for Te Taumutu Rūnanga.

The traditional name for the lake was Te Kete Ika o Rākaihautū meaning the food basket of Rākaihautū. Rākaihautū was a legendary ancestor who helped form the landscape of the area. The atua (God) which guarded the lake was Tūterakiwhānoa. A protective taniwha, he preserved the lake and its food sources. It was extremely important that Māori avoid angering this atua least he take revenge and so, a deep respect of food gathering protocols was vital.

The food sources of Te Waihora were once abundant and included tuna (eels), pātiki (flounder) and aua (mullet). Te Waihora was a famed mahinga manu wai māori (place for taking waterfowl). Sadly, today the richness of Waihora as a mahinga kai has been largely sacrificed to farmland. While it remains a mahinga kai, its yields have been significantly reduced due to the periodic drainage of the lake in order to maintain reclaimed land and pasture.

In the pre-Pākehā past however, the control of the lake’s level was retained at an optimum water level for the birdlife that lived there and provided kai for many people. The lake was only drained when its level exceeded the normal maximum. Kōrari (flax stalks) were dragged across the sand to make the initial opening of the water to the sea. Such carefully monitored drainage of the lake took place for several hundred years, consistently maintaining Waihora's abundant supply of kai.

Under the Ngāi Tahu Claims Settlement 1998, ownership of the lake bed of Te Waihora was returned to Te Rūnanga O Ngāi Tahu who are now able to reassert their rangatiratanga (ownership) over this significant site through direct control of its management.

W.A. Taylor, Waihora: Maori Associations with Lake Ellesmere, 1944. A booklet of articles first published by the Ellesmere Guardian, at Leeston