Tabletop roleplaying games, like Dungeons and Dragons, have experienced a surge in popularity in recent years. Live shows and podcasts such as Critical Role, The Adventure Zone, and Dimension 20 have attracted huge followings. Locally, we have the live show Dungeons and Comedians that frequently sells out. Stranger Things pushed Dungeons and Dragons further into mainstream media and you can now pick up an introduction game and play in the world Will created, demogorgon and all. They’ve shown how tabletop roleplay games (TTRPGs for short) can be engaging and exciting, and that the game can be as serious or fun as you want! 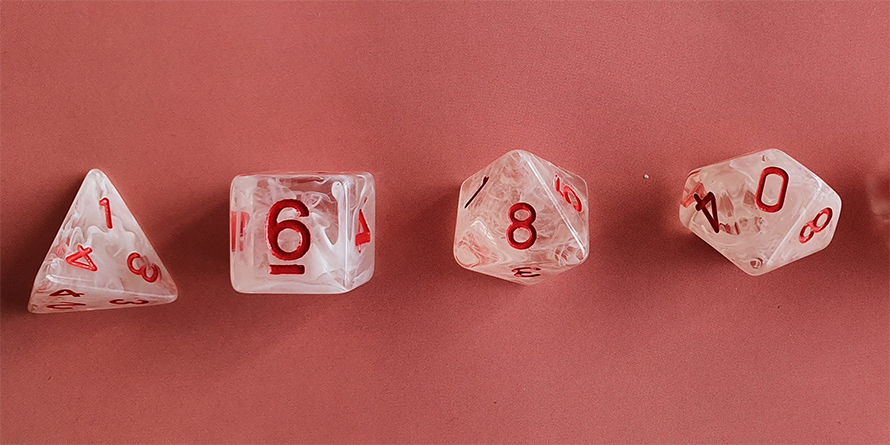 TTRPGs can be excellent way to spend an afternoon. It’s fun for all ages! And with group calls, you can even play with friends and family faraway. This blog features a range of different games that you can play – many are quick to set-up and can be played entirely over a few hours. You’ll just need your imagination, some pen and paper, and some dice. Fear not if you don’t have any dice  – there’s lots of virtual dice rollers online. You can make these games as serious or silly as you want.

Going to play online? Check out Playing from a Distance: Using the Theatre of Your Mind to make your game stand-out!

If you’re jumping into this brand new, welcome! Here are some terms to help you get up to speed.

Rules – Games have a set of rules often based on dice rolls that determine how successful your actions are. Some TTRPGs are rules heavy meaning there are a lot of them – like Dungeons and Dragons – and others are rules light – meaning there are very few rules. Rules light games are quicker and easier to pick up and learn. They’re often more imaginative and rely on collaborative storytelling. People might take rules from a game – like Lasers and Feelings – and apply them in a new setting.

System – This term is used to refer to a set of rules that are used in a variety of games. Those games may differ widely in setting, theme, and tone. The rules might be modified or expanded upon to fit the setting of the new game.

Game Master or Dungeon Master – A participant in the game that takes responsibility for running the game. They are the Storyteller and often use a set of rules to decide what the outcome is for the players’ actions.

One-shot/Micro/One-Page – These refer to games designed to be played in a single session. Think of it like a movie compared to a tv-series.

1d6 – Abbreviations like this are common throughout TTRPGs. It translates to 1 die 6-sided – the standard die we’re all familiar with.  A 1d20 is 1 dice with 20 sides.

This one-page game has a super simple set of rules that only require one six-sided die. You are the crew of the interstellar scout ship Raptor. Your mission is to explore the depths of space, encounter alien life, and defend the Consortium from threats. A threat like the Captain becoming possessed by a psychic entity…

A one-page murder mystery using the Lasers & Feelings rules. You are a team of private investigators working for Graham Golden’s Detective Agency. Your job is to investigate crimes in the district of Egglewood, Chicago, where corruption is rife and everything is made out of breakfast food. Detective Golden and his secretary Miss Mimosa are away on a tropical vacation when, early one morning, a murder case is brought to your attention...

Oh, Dang! Bigfoot Stole My Car With My Friend’s Birthday Present Inside
Free

Who said roleplay games had to be super serious? Based on the Lasers & Feelings rules, this is a game about going on a road trip to track down Bigfoot, get your car back, and maybe learn a little something on the way. There’s a sequel too – Mothman has moved in to your house.

Magic & Mischief
Free
Live you Harry Potter dreams! You are students at the Young Wizards’ School for Arcane Excellence, learning to harness and hone your Gift. A Dark Curse has fallen upon the Headmistress, leaving the staff and faculty in an uproar; classes are still in session, but all the distraction makes a great opportunity for magic and mischief! Uses Lasers & Feelings rules.

Honey Heist
Pay What You Want
A one-page RPG that’s a tad different. You have a complex plan that requires precise timing. You are also a bear. There’s not much beyond that and your bear can even wear a hat. Easy to run and play.

Hogwarts
Free
The game uses simple rules, based on the Powered by the Apocalypse system, that let you get right to what’s fun about being a young witch or wizard at Hogwarts. Cast spells & brew potions, sneak around after curfew, play Quidditch, stand up for your friends & confound your rivals, and unravel mysteries in Hogwarts Castle. Learning the rules is easy & creating a character is quick, but the game supports long-term stories with lots of fun twists & turns.

Adventurers on A Dime
Free
This is a simple, rules-light system written with brand new players in mind. It introduces basic concepts found across roleplaying games and draws inspiration from Dungeons and Dragons, Honey Heist, and Lasers and Feelings. It’s perfect if you’ve already got a story or adventure in mind that you want your friends or family to play through.

Cozy Town
Pay What You Want
Cozy Town is about collaborative storytelling and worldbuilding. It’s inspired by games like Stardew Valley and Animal Crossing – gather a group of friends and build a town together. The rules are quick to learn and you need a deck of cards instead of a dice. This would be a perfect ‘make believe’ game to play with younger kids.

You can find more ttrpgs on DriveThruRPG and Itch.io. Itchi.io isn't that easy to search but here are all the physical games that are listed as free or pay what you want.

There are also games you can play on your own! Check out this collection of solo games on Itch.io. It ranges from journaling and writing exercises to games to play with your cat or dog.
My pick is Guided Meditation  - put on your favourite album or playlist and use the table of prompts to experience the music in a whole new way.