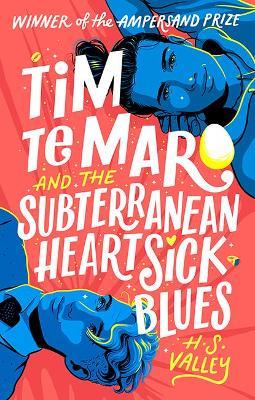 Imagine, for a moment, that a certain school of Witchcraft and Wizardry was hidden, not in the Scottish highlands, but instead in an underground complex deep beneath Fox Glacier in New Zealand.

Perhaps that’s what H. S. Valley was imagining when she wrote Tim Te Maro and the Subterranean Heartsick Blues.

Kids who attend Fox Glacier High School for the Magically Adept wouldn’t go to Honeydukes in Hogsmeade whenever they left school for a bit of shopping and shenanigans. Nope, they’d head to the Four Square at Fox Glacier township. They’d eat pavlova instead of pumpkin pasties. The school wouldn’t abandon normal subjects like English and Maths in favour of the magical ones. Oh no, this school would ensure the kids got a really well rounded education, studying all the NCEA subjects right alongside their International Certificate in Magical Proficiency ones. And there’d be no foolish wand waving here, because “magic in New Zealand … [is] to do with the relationship between people and nature and stuff,” so everyday things like shells or stones can be used to channel the magic.

Don’t let all the magic high school stuff fool you into thinking that Tim Te Maro is just the kiwi version of The Boy Who Lived, though. This is not a grandiose story of epic battles between good and evil. This is the story of Tim Te Maro and Elliot Parker, a couple of kids who took an instant dislike to each other when they started high school. Elliot is a rich, blond kid from Auckland, and as far as Tim is concerned, he's a total dickhead. But when they both get dumped right before the start of the Life Skills egg-baby parenting assignment, Elliot suggests they work together and ace the assignment as a way to get back at their exes. While Tim and Elliot struggle to keep their golden egg-baby alive and happy, they start to wonder if they really hate each other as much as they always thought. And if they don't hate each other...then what?

I have to say that the egg-babies were one of my favourite things about this book! They are brilliantly named; my favourites were Fabergé, Cedric, and .... wait for it... Ebony Dark'ness Dementia Ravenway III (if you know, you know!). I really want to tell you all of their names, but I'm not going to spoil the fun. I also loved the quirky chapter titles, which add an extra Kiwi element to the book—they are all titles of New Zealand songs, creating an ad hoc who's who of Kiwi music. Songs from the likes of Lorde, Kimbra, Crowded House, Fly My Pretties, and Benee all make an appearance.

This book is a funny, lighthearted, romantic story where magic is the backdrop rather than centre stage. Personally, I’d have been happy to see more of what magical education in New Zealand might look like. But it’s a great story about two seventeen-year-olds learning about who they really are, and what really matters to them. If you're a Drarry shipper, or if you love LGBTQIA romance stories, then this is the book for you!

Tim Te Maro and the Subterranean Heartsick Blues is the latest winner of the Ampersand Prize from Hardie Grant Children's Publishing.