On 12 April 1850 John Robert Godley, first leader of the Canterbury Association settlers, arrived with his wife in Lyttelton on the Lady Nugent. He quarreled with Captain Thomas, and departed for Wellington, but returned 28 November.

Godley married Charlotte Griffith Wynne in September 1846. The family arrived in Port Cooper (Lyttelton) in April 1850. He was met by Captain Thomas and shown the plans for three towns, and housing for the new settlers at Lyttelton.

The fleet of the first four ships reached Lyttelton in December 1850 and was met by Godley. He was the leader of the settlement for the next two years, and in this time changed the Canterbury Association’s conditions for the pastoral leases (land in the surrounding countryside leased for farming), so that the new settlement was able to make a good start to establishing a strong farming base.

Godley believed that the purpose of the Association was to found Canterbury, not govern it, and that the people making a life in the new settlement should decide how it was run, not people in England.

Godley returned to England in December 1852, where he wrote for some of the newspapers on the subject of colonial reform. He later worked for the War Office and continued to argue for self-government for the British colonies.

Godley died on 17 November 1861 in London. In 1867 the citizens of Christchurch erected a statue of him in Cathedral Square inscribed:

The statue, the first public commemorative statue in New Zealand unveiled to a single person, was sculpted by the English Pre-Raphaelite sculptor Thomas Woolner. The statue fell from its plinth during the 22 February 2011 earthquake. It was on display in the Quake City exhibition in the Re:START Mall and is now back in Cathedral Square. 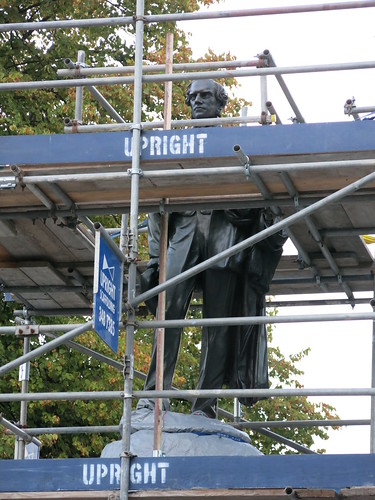