This page looks at the history of some of Christchurch's notable statues.

William Rolleston was the fourth and last Provincial Superintendent of Canterbury (1868-1876). Situated in Rolleston Avenue outside the Canterbury Museum, the marble statue of Rolleston was sculpted by English sculptor Herbert Hampton. It was erected in 1906. Rolleston, an early pioneer who arrived in 1858, was involved in all aspects of political and community life.

His statue stands with its back to the Museum and faces the old university, thus embracing the two major institutions of which he was chief political architect. The statue fell off its plinth in the 22 February 2011 earthquake, and its head broke off.

William Sefton Moorhouse was Superintendent of the Province of Canterbury from 1858–1862 and again from 1866–1868 and he is chiefly remembered as being instrumental in bringing about the rail tunnel through the Port Hills linking Christchurch and Lyttelton. His statue, executed in London in 1885 by G. A. Lawson, is located in the Botanic Gardens facing the western end of Hereford Street.

James Edward Fitzgerald was the first Superintendent of Canterbury from 1853–1857. His statue in Rolleston Avenue near Cashel Street was donated to the Domains Board by R. E. Green in 1938. Executed in plaster by F. A. Shurrock, a prominent Christchurch artist and art teacher, it was cast in bronze in England and erected in 1939.

In Victoria Square, approximately 50 metres from its original site, a statue of Queen Victoria commemorates the Golden Jubilee of the founding of the Canterbury Settlement (1900) and is also a memorial to those soldiers of Canterbury (79 in number) who were killed in the South African War between 1900–1902.

The foundation stone was laid on 22 June 1901 by His Royal Highness, The Duke of Cornwall and York (afterwards King George V), and the statue was unveiled on 25 May 1903 by the Mayoress, Mrs H. F. Wigram.

The statue was sculpted by British sculptor Francis J. Williamson.

The statue of Captain James Cook RN Victoria Square was executed by William Trethewey, a Christchurch sculptor. Gifted to the City by the late M F Barnett, the statue was unveiled on 10 August 1932 by the Governor General, Lord Bledisloe.

On the granite base of the marble figure is the inscription: James Cook, Captain, Royal Navy, circumnavigator who first hoisted the British flag in New Zealand and explored her seas and coasts, 1769–70, 1773–4, 1777 and, lower down: Oceani investigator accerimus.

The statues of Queen Victoria and Captain Cook survived the 2011 earthquake and are still standing in Victoria Square. 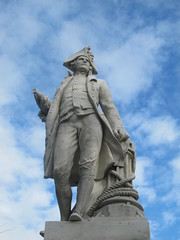 Prominent in Cathedral Square and unveiled on 6 August 1867, this statue is inscribed simply:

The statue, the first public commemorative statue in New Zealand unveiled to a single person, was sculpted by the English Pre-Raphaelite sculptor Thomas Woolner. In 1907 the statue was hidden from public view by the tram shelter. Despite public deputations to the Council, the statue was not moved to a more prominent public position on the north side of the Cathedral until 1918. There it remained until 1933 when it was returned to its present and original site.

The statue fell from its plinth during the 22 February 2011 earthquake and has become one of the most photographed symbols of the damage to Christchurch. It was on display in the Quake City exhibition in the Re:START Mall and is now back in Cathedral Square. 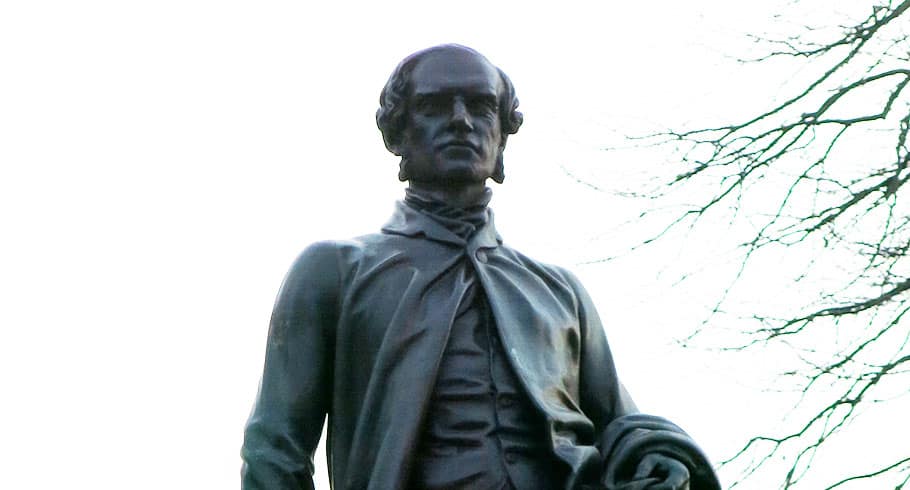 A statue of Captain Robert Falcon Scott, CVO, RN, stands on the river bank at the intersection of Oxford Terrace and Worcester Street. It was sculpted by his widow, Kathleen Scott, and purchased from her by the Christchurch City Council and unveiled in 1917. It serves also as a memorial to those who died with Scott on his return journey from the South Pole in 1912, and bears his last message:

I do not regret this journey, which shows that Englishmen can endure hardships, help one another, and meet death with as great a fortitude as ever in the past.

The statue was toppled from its plinth in the 22 February 2011 earthquake and was badly damaged. In early 2017 restoration work on the statue began. The work was completed and the statue was unveiled a second time on its Oxford Terrace plinth on 6 October 2017.

This was originally derived from the Christchurch City Council handbook of 1998. See also Public Art in Central Christchurch, a study by the Robert McDougall Art Gallery, 1997.