Stories about settlers and pioneers are always fascinating and mysterious. Why do people decide to move to a new land far away from home? How do they cope with all the challenges? What factors have made them successful? If you had attended a speech delivered by Jenny Sew Hoy Agnew and Trevor Agnew on 30th October at the 2020 Spring WORD Christchurch Festival, you might have already found answers.

Jenny and Trevor gave their talk based on their recently-published book titled Merchant, Miner Mandarin: The Life and Times of the Remarkable Choie Sew Hoy, opens a new window. This book tells a story about Mr Choie Sew Hoy’s life from his early years in China to emigrating to Australia then New Zealand in the context of global population migration driven by Gold rushes in the mid-19th century. Historical records, photos, and personal accounts show Mr Choie Sew Hoy became a successful settler in New Zealand. He made multiple contributions to societies and economies as an entrepreneur, a merchant, and a public figure. As they note:

“a man of two worlds, Choie Sew Hoy was a success in both”.

In their speech at the WORD Festival, they highlighted Choie Sew Hoy’s achievements with historical photos and images while adding some personal attachments to the research process. As a great-great-granddaughter of the remarkable Choie Sew Hoy, Jenny became interested in her family history when doing a university assignment on drawing a family tree. When Trevor married Jenny, he found he needed to rework his family tree to trace his relations as there were so many related Sew Hoys. Then, they started the research journey leading to this book. The stories they told by using collected photos are informative and vivid and the way they presented was relaxing and amusing. The audience burst out laughing from time to time. Jenny concluded their presentation with her identity statement saying that “my ancestor came in the mid-19th Century. I am a New Zealander. I would like to think that many of us, born and bred in New Zealand and speaking mostly just English, would be considered New Zealanders rather than others."

The question time was interactive. People in the audience expressed their appreciation of and interest in the work. Jenny shared information on the Sew Hoy Family Reunion 150th Anniversary in 2019, opens a new window. Trevor thanked librarians and archivists for their help with finding resources for the research project. Jenny said:

“A brilliant thing about being a New Zealander is that we are one. Everywhere we went, everybody wanted to help. We are a generous nation.”

For Jenny and Trevor, it was a natural process working together for this book though there were challenges in tracing historical records. I luckily had a chance to talk with Jenny and Trevor after their presentation, thanks to their efforts to meet me despite their tight agenda that day. The conversation between us tells more about their thoughts as the scholars and descendants of the remarkable Choie Sew Hoy.

(Q): This book is a great contribution to New Zealand's history and the Chinese community. I am especially fascinated to read literature work like this book that reflects on historical events through personal experiences/ventures. How did you come up with a great idea for writing this book?

Jenny: "When I was at university, I did an Anthropology paper. One of our projects was to draw a family tree. Each student was handed out an A2 size piece of paper. I had to go back for more pages. When I talked to my father, who was my source of information about the family, he was able to give me the names, deaths, and births of family members. I wrote them down. That started me thinking of my place in the family. I’d like to know more".

Trevor: "I was dragged to China when Sew Hoys went for Qing Ming. This was a fabulous experience. Both of us decided to write something about the village we had been to, the graves we had visited and the society".

(Q): In this book, readers can learn about Mr Choie Sew Hoy's legendary success and his financial acumen, kindness to fellow Chinese immigrants, bravery against racism, and contribution to local economies. There are also examples and stories on the challenges Chinese pioneers confronted and their resilience, which readers would find inspiring. Do you have any suggestions for new Chinese immigrants? How should they follow the footpaths of their great ancestors?

Jenny: "The old Chinese raised funds and gave donations to charities. They joined things. When new people come to a country, they tend to go where others have the same culture. This is fine because it is for safety, but if you want to be part of the community, you have to be in that community. We learned a little bit when we went to live in Southland. We lived in Christchurch and did not know Southland very well. When we went down to Southland, the first thing was joining groups and going out into the community. If you show you are willing to help, you can take part in things but don’t do it anonymously. Otherwise, how do people know who you are? You have to be part of the community and introduce yourself. City Councils do cultural days. They are so valuable".

(Q): This question is to Mr Trevor Agnew. I read a newspaper article in Otago Daily Times, opens a new window. It reads, "When Trevor Agnew married Jenny Sew Hoy, he gained a small army of new uncles and aunts Wongs and Sew Hoys". In this book, the description of Chinese families and kins would also be interesting to readers from a different cultural background. Trevor, what do you think about the family ties and kinship based on the Chinese tradition?

I wrote that article to honor Uncle George Wong and Uncle Bill Wong, who were instrumental in getting me (and Jenny) started in writing down a permanent record of the various family histories. If you read the ODT article you’ll see that George was anxious to have me record the achievements of his remarkable mother Sam Kwai Lowe. In interviewing the various Wongs, I became even more aware of the vital importance of family ties among the NZ Chinese and the role of the family in enterprises such as market gardens and fruit shops.

My own background is Otago Scottish, with ancestors arriving in the 1860s. Jenny and I have visited the farm my paternal family came from in Scotland and met the Agnews who still live there. In 2007 we did a similar visit to Guangdong and went to both Jenny’s maternal and paternal villages. So we spent Ching Ming with Choies at Sha Kong and then visited Wongs at Gwa Leng. I found all these deeply moving and appreciated the way that people were remembered. Graves, obviously but also homes, etc.

Both Scots and Cantonese have strong family ties and often their personal and economic survival has depended on this.

(Q): In Chapter 29 of this book, the first sentence reads: "Very little is known about Sew Hoy's personal life but some evidence is still there to be found." Does this indicate you would publish more about Mr Choie Sew Hoy and the Sew Hoy family in the future? Is there any plan in mind?

No. We meant no letters, no diaries. So we have to deduce things about him. For example, we know from train bookings, how he always took his wife and children (and nursemaid) with him on journeys to e.g. the Christchurch Race meetings. He was proud of them.

There is plenty of room for new books, e.g the Nokomai goldmine; e.g. the Sew Hoy clothing factories in Otago, the story of Hugh Sew Hoy and his sons. There are three books you can research and write.

There are lots of other fascinating Chinese histories to be written. 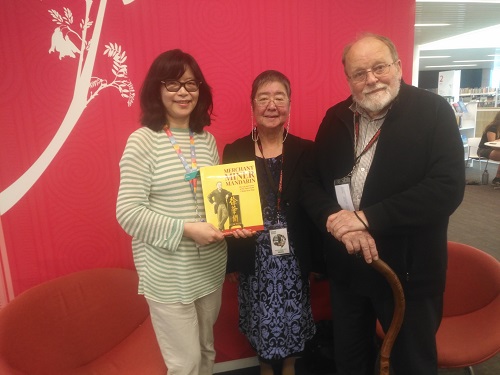 Jenny Sew Hoy Agnew, Trevor Agnew and I at WORD Christchurch in Tūranga.