This page features extracts from a recorded interview with Naomi Bunker and John Panirau speaking about Wairewa Marae in June 2004. 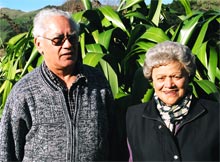 Naomi Bunker is Ngāti Irakehu and the Taua at Wairewa Marae. She passed away in May 2015. She grew up at Te Pā o Wairewa, her childhood home is the only house that remains standing on the pā road today. Some of her earliest memories are of time spent at her marae. She served her people as kaikaranga at Wairewa and trained the next generation so that they are able to step into this important role. She regarded tikanga as the most important taonga to pass on to the next generation — Tikanga makes a Marae.

John Panirau (Te Ati Awa and Ngāti Mutunga) describes himself as a Taranaki overstayer— though he does not whakapapa to Wairewa, he spent much of his childhood at Wairewa and so is deeply connected to the area. He attributes his rich knowledge and understanding of the local history to his fascination with Te Reo as a child and his desire to listen to the old people’s stories about the land and tūpuna. He regards his role at the marae today as primarily to support his partner Naomi in her role. He also knows where every nail is in the place and oversees the upkeep of the marae, its grounds, buildings, and cemetery.

Growing up at Wairewa: Naomi

Magnificent forest of giant tōtara once dominated the Little River Basin that cradles Te Roto o Wairewa (Lake Forsyth). Today, small pockets of native bush and the reedy lake edge growth are small reminders of the lush forest and abundant birdlife that existed in the area until the middle of the 19th century. Little River was earlier referred to as the riverand probably derives from an English pronunciation of the Māori Wai — rewa. Wairewa means water lifted up.

Wairewa marae is situated in the Ōkana valley on the Eastern side of Te Roto o Wairewa just past Little River on the Christchurch — Akaroa highway. It is home to the hapū of Ngāti Irakehu and Ngāti Makō. Wairewa is one of the five Ngāi Tahu Papatipu Rūnanga situated on Horomaka (Banks Peninsula).

A new hall built on the footprint of the three previous whare, opened with a dawn ceremony and celebrations on 1st November 2008. Te Makō is the fourth hall to bear this name. Standing on the tāhuhu gazing out across the marae to Te Upoko o Tahumatā stands the tekoteko (carved figure) of Puraho (father of Makō) and below him the koruru (carved gable figure) of Makō. The whare Te Makō has now been refreshed and will continue to be a place of gathering for the people of Ngāti Makō and Ngāti Irakehu. For the people of Wairewa the hall represents a modern facility to take them into the 21st century.

Wairewa Marae’s original hall was opened by R. Paurini in 1855. Thirty years later on 16 April 1885 a second hall was opened by H.K. Taiaroa on the same site. Unfortunately this hall was burnt down around the time of World War One. The third hall was erected in 1919 — 1920 and stood beside the main highway, its sunny porch facing the maunga, Te Upoko o Tahumatā until 2007, when it was dismantled to make way for the new building opened in 2008.

The new hall is still called Makō and the adjoining whare kai is Te Rōpūake. Both are named after tūpuna who descend from Tahupōtiki, the founding tupuna of Ngāi Tahu. Makō was the grandfather of Irakehu after whom the main hapū of the area takes its name. Te Rōpūake was a princess of the Ngāi Tahu people — her father was Te Rakiwhakaputa, famous for laying his rāpaki (waist mat) down on the shores of Whakaraupō (Lyttelton Harbour) thus giving the name Rāpaki to his chosen bay.
Te Rōpūake features a series of bright paintings by Paul Skipper that depict Wairewa histories. 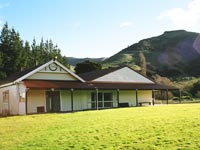 A spotless kitchen and ablution facilities are at the back of the hall that opens onto a wide porch.

Outside, the marae is surrounded by hills. Looking down on the marae from the western side is Wairewa’s maunga, Te Upoko o Tahumatā and across the highway to the east stands Tahu Ahi (Signal Hill). Both maunga hold important histories. A small flight of steps on the marae grounds, leads up to a grassy knoll where the historic monument to Tangatahara stands surrounded by a trio of tōtara trees.

In 1900 a monument was unveiled in memory of Tangatahara a great fighting chief of Ngāi Tahu. An account of the ceremony states that Maori… gathered in hundreds about the Maori house on a knoll, at the back of which stood the pedestal and statue of the old chief shrouded in his mat and awaiting his unveiling1. Māori from all over the South Island attended the ceremony. 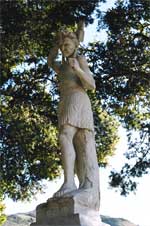 The monument was carved by a French sculptor who did not know what the great chief looked like and so, based the stern facial features of the great warrior on the visage of a French aristocrat. An actual likeness of Tangatahara exists in the form of a bronze cast that is housed at the Akaroa Museum — it is remarkable that a man of such prestige allowed this cast to be made considering the required touching of his head and its tapu nature. Tangatahara led the unsuccessful defence of Ōnawe peninsula in Akaroa harbour and later helped to drive Te Rauparaha out of the South Island. 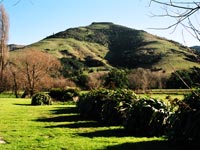 Many wāhi tapu are associated with Wairewa. The hills surrounding the lake and the adjacent bays ring with histories. Tradition says that a great waka full of precious taonga was moored at the edge of Te Roto o Wairewa and covered by a landslip — the waka and its treasures remain hidden there, deep in the newly formed bank under earth and water. The earthwork remains of Ōruāka Pā are visible on the tip of the nearest spur across the lake from the main highway at the seaward end of the valley. Ōruāka was probably last occupied in the 1820s. Another Māori settlement also once existed opposite Ōruāka near Birdlings Flat. This pā was called Matahāpuka and was still occupied in the 1840s. This area later became known as Poranui.

As with all the Māori settlements on Horomaka (Banks Peninsula), Wairewa became embroiled in the internal Ngāi Tahu warring that culminated in the Kai Huanga feud. Wairewa was the site of the first musket warfare in Canterbury and involved Wairewa Ngāi Tahu fighting against a war party from Kaiapoi Pā and a southern war party led by Taiaroa the chief from Ōtākou. The Wairewa contingent escaped onto the lake in waka but were pursued by Taiaroa and his war party. Many were killed and eaten.

The Wairewa Pā was on the east bank of the Ōruāka stream. The last people to live in this small Māori settlement of about ten houses, left in the 1960s. The old pā road still exists, bounded by overgrown paddocks dotted with a few chimney stacks and foundations that linger amid the long grass. Only one house still stands, buttressed by trees that have grown up through its framework. (This house was the childhood home of Naomi Bunker whose recorded memories of Wairewa can be heard on this page).

The pā had its own Native School that stood on a small spur above the settlement. A whare karakia also stood on this spur commanding a view of the pā and the neighbouring hills. The whare karakia was opened on 19 January 1870 by the Reverend James Stack. It was made of tōtara with stained glass windows. Neither the church nor the school has survived but two stained glass windows from the whare karakia have been preserved for future use. Wairewa’s urupā stands higher up the hill with a magnificent view down the lake towards the sea.

In 1856 a Māori Reserve was set aside at Wairewa. The present day site of the Māori Reserve lies between the old Wairewa Pā site and the northern end of Te Roto o Wairewa.

In the tradition of 'Ngā Puna Wai Karikari o Rākaihautū', the chief Rākaihautū is said to have dug the principal lakes of Te Wai Pounamu including Wairewa and nearby Waihora with his famous kō (digging stick) that he then thrust into Horomaka forming what is known today as Tuhiraki or Mt Bossu. A Taniwha called Tūterakiwhānoa occupied the lake. He was the atua given the task of making Te Wai Pounamu habitable for the children of Tāne who came after him. He created the bays, harbours, estuaries and waterways.

Te Roto o Wairewa is of great significance to Ngāti Makō and Ngāti Irakēhu. Its waters are famed for their eels which migrate out to sea in autumn. Traditional knowledge of the sustainable utilisation of this mahinga kai has been handed down through generations. Every year Wairewa whānau come together to harvest the treasured tuna as their tūpuna did before them. The mahinga kai status of the lake is however under threat due to severe water pollution but the tuna continue to run despite this, albeit in greatly reduced numbers.

The establishment of sawmills at Wairewa in the 1850s laid the landscape to waste. As the bush was destroyed, birdlife disappeared and pollution from the mills rendered the river water unsafe for drinking. This led to several epidemics of typhoid that afflicted and took the lives of many Wairewa Māori. Farming and the introduction of chemical fertilisers has led to further degradation of the water quality and a high sediment concentration in the lake.

Wairewa Rūnanga is the guardian of the lake and is working with other expert groups and the local community to manage the restoration of the lake area. Replanting natural filtering plants is the first step in a long range plan to restore the lake to something of its former glory. Wairewa Rūnanga’s goal is to establish a Mahinga Kai Cultural Park that will see the lake and its surrounding area managed for the purposes of rehabilitating the area and traditional food gathering practices. Thus the spiritual, cultural and mahinga kai values of the lake may be upheld for future generations of Wairewa whānau.

Associated Images in the Photograph Collection