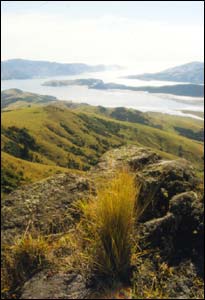 It was named as such after the extensive growth of raupō reeds that was once found at the head of the harbour at Ōhinetahi.

Whakaraupō was occupied by Waitaha and Ngāti Māmoe tribes before Ngāi Tahu secured it as their possession under the leadership of Te Rakiwhakaputa who had accompanied the chief Moki on the Ngāi Tahu heke (migration) to Waitaha (Canterbury).

There is a long history of Māori settlement at many of the bays of Whakaraupō including:

Whakaraupō has many significant landmarks and wāhi tapu (sacred places).

Its hills and valleys were once covered in native bush and rang with the sound of bird life. Due to land clearance for farming, housing and roading purposes most of the indigenous vegetation has now disappeared and along with it the native bird populations.