Oh ye! Who have your eyeballs vexed and tired

Feast them upon the wideness of the sea.

I love the Sea and books about the Sea. Thrillingly rough and washing up over carparks or velvet-smooth, there is something at once wild and calming about its compelling expanse.

Although I swim until March, Philip Hoare is a man who swims in the ocean every day (at 4.30am), no matter where in the world he may be, or whatever the season. He was not to be deterred by Canterbury's spring temperatures, which swung from 'damp and drizzly' (Melville) to very welcome sparkly sunshine within a day.

Hector's dolphins came to take me away; I may be gone some time@WORDChCh pic.twitter.com/lbF9s22MvM

Hosting a workshop and documentary on the classic Moby-Dick and speaking at WORD Christchurch Festival about the inspiration for his books, Philip shared his wonder of the ocean with the redoubtable Kim Hill for a large audience.

Risingtidefallingstar is Hoare's latest book. Following a common thread this WORD Festival, in Risingtide Philip also blurs the lines between fact and fiction in an alliterative tidal flow that combines the mystical with tales of experience; taking the reader on a journey to discover how the ocean has influenced human life, literature, art, and essentially, ourselves.

To signpost this journey back to the primal self, Hoare refers to many wonderful works of art and literature inspired by the Ocean itself. Shakespeare's Tempest, Spenser's Faerie Queen, the works of Shelley and of course the master of high sea adventure, Herman Melville; absorbed all and more of these, including the Bible.

At times in human story the Ocean is appears to be a metaphor for Nature's evil. But in doing so it raises the question of, "Can Nature be evil?" turning the spotlight on perhaps the true villain, man:

"Humans have become disconnected from the natural world"

"Our vocabulary, speech, has distanced us."

Here Hoare apologises for not speaking Whale. (We later discover from a member of the audience that Waitaha can speak whale. That's another story.)

What struck me was how similar to humans whales can be, not just physically (our bone structures are very similar), but maybe more evolved as they stuck to their path, and weren't distracted by dreams of land (like The Little Mermaid, to her doom). Whales define themselves in relation to each other, says Hoare; like family, and are never alone.

Humans are defined by our larger culture, Philip himself relating poignantly to the death of iconic David Bowie, whose loss was felt worldwide, while he was writing this book. Bowie is, of course, the Falling Star.

We return to the subject of swimming. While in Canterbury, Philip has taken a dip at Sumner Beach and in Akaroa. He's heading north to sunny Nelson next. The ritual of swimming is for Hoare a meditation, made more sensual by being done in darkness. In times gone by, Monks meditated in the sea, immersed in its timelessness.

"Why do you do it?" Asks a relentlessly funny Kim Hill.

"To leave it all behind," replies Philip, "the Earth, earthly problems, gravity itself."

"But you could die."

"That's part of the charm." 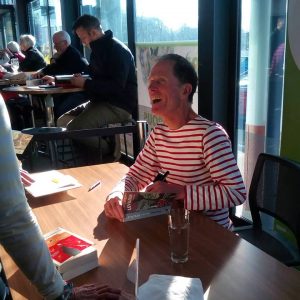 Leviathan, Or, The Whale

The Wind Whales of Ishmael (a sequel to Moby Dick)