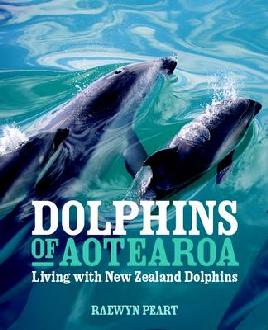 Hector's dolphin was named after Sir James Hector, curator of the Colonial Museum in Wellington, who was interested in biology and who first examined a skeleton of this dolphin species. It has numerous names in te reo Māori.

Hector's dolphin is not only one of the rarest dolphins in the world, but also one of the smallest. It measures only 1.4 metres at its longest, and weighs between 38-48 kilograms.

It is the only New Zealand dolphin with a rounded dorsal (back) fin, and a sloping snout, unlike the protruding beak of the bottlenose dolphin. Its colour is a combination of light grey, creamy white, and black.

A female will give birth to a calf every two or three years. The calf matures at about 8 years old. Hector's dolphins live to about 15 to 18 years old. They are a sociable animal, playing in groups of up to 12 dolphins, and often "surfing" on beaches.

Found only in New Zealand waters, the Hector's dolphin is known as the "down under dolphin". Most are found in the coastal waters around Banks Peninsula, Te Waewae Bay in Southland, and along the West Coast of the South Island, although a small population lives off the west coast of the North Island. There are two sub-species of Hector's dolphin, the South Island Hector's dolphin, and the Māui dolphin which is found off the West Coast of the North Island. These sub-species are distinctly different genetically, and the Māui dolphins (Popoto) are significantly more endangered - pnly between 48 and 64 individuals over one year of age remain.

Hector's dolphins feed close to the shore on small fish and squid. Some of these varieties are the fish commercial and recreational fishermen are trying to catch in their set nets. Often dolphin are caught in the nets, trying to get the fish.

Between 1984 and 1988, 230 Hector's dolphins were recorded as having been drowned in nets along the Canterbury coast. This was from an estimated population of 740 dolphins. Set nets were banned in the area and a marine mammal sanctuary was established around parts of Banks Peninsula, covering an area of 1140 square kilometres.

Another threat to Hector's dolphins is marine pollution, in the form of plastic bags and other rubbish in which they may get caught or they may eat. Because they have a low birth-rate, the dolphin population does not recover quickly from these losses.