Ernest Rutherford’s parents were James and Martha Rutherford. Ernest was the fourth of twelve children. In 1876, the Rutherford family moved to Foxhill, and the ten-year-old Ernest was given his first science book at school there. In 1877, while at school in Havelock, Rutherford won a scholarship to Nelson College.

After three years at Nelson College, Rutherford won a further scholarship to attend university. Rutherford went to Canterbury College (now University of Canterbury) from 1890 to 1894, graduating with a Bachelor of Arts in 1892, and then with a Masters of Arts in Mathematics, Mathematical Physics and Physical Science the following year. While at university he was also a keen rugby player.

After graduating, he taught for a few weeks at Christchurch Boys’ High School, but was not particularly successful as a teacher. He enrolled at university again to study Geology and Chemistry for a Bachelor of Science, so he would be eligible for a scholarship that would allow him to study overseas.

Ernest Rutherford left New Zealand in 1895 to study at the Cavendish Laboratory, Cambridge, as a research student. He adapted a device he had developed back in New Zealand, using it to detect electro-magnetic waves, and in 1896 succeeded in detecting waves over several hundred metres. The head of the Cavendish Laboratory, Professor J. J. Thomson, recognised Rutherford’s ability as a researcher and invited Rutherford to work with him.

In 1898 Rutherford took up the post of Professor of Physics at McGill University in Montreal, but returned to New Zealand briefly in 1900 to marry May Newton, the daughter of his Christchurch landlady. Their only child, Eileen, was born in 1901. Rutherford continued his researches into radioactivity at McGill, discovering radon, a radioactive gas. He also found that some heavy atoms break down into lighter atoms.

In 1908 he was awarded the Nobel Prize in Chemistry for his work on the transmutation of elements and the chemistry of radioactive substances. It was Rutherford’s work on the rate of decay of uranium atoms that led to the development of radioactive dating.

In 1907 Rutherford accepted a position at Manchester University. With a colleague - Hans Geiger - Rutherford developed a method that used electricity to detect and measure radioactive atoms.

In 1911 he worked out a nuclear model of the atom in which almost all of the mass of an atom is concentrated in a very small nucleus. A Danish physicist, Neils Bohr, worked on the atomic model with Rutherford, and together they produced the model of a tiny nucleus surrounded by orbiting electrons, which is still used today to explain atomic theory.

In 1914 Ernest Rutherford was knighted, and made a brief trip to Australia and back to New Zealand. Back in England, during the following years of the First World War, Rutherford worked on acoustic methods of detecting submarines.

Resuming his work on radioactivity after the war, Rutherford discovered that by bombarding light atoms with alpha rays, and changing nitrogen into oxygen, it would be possible to split the atom.

By 1919 Rutherford had become the Director of the Cavendish Laboratory. He made another visit to New Zealand in 1925, and toured the country giving talks on the structure of the atom. He also encouraged government investment in education and scientific research. 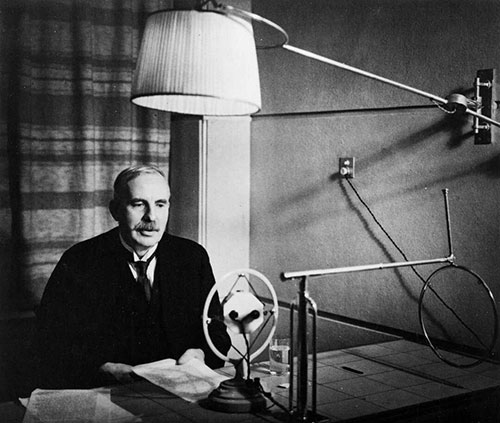 In 1931 Rutherford was made a peer, becoming Baron Rutherford of Nelson. He included in his coat of arms a kiwi and a Māori warrior.

Ernest Rutherford died on 19 October 1937, partly as a result of delays in operating on a problem hernia. He was 66 years old. His ashes were buried in Westminster Abbey, in London, alongside other great British scientists. 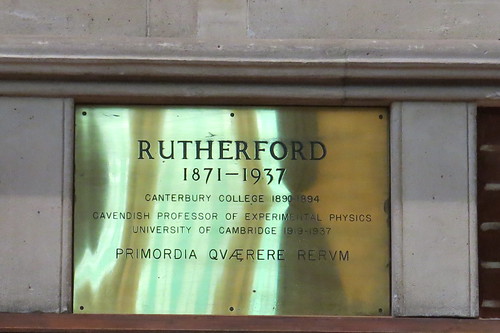 Rutherford’s call for New Zealand institute for scientific research resulted in the establishment of the Department of Scientific and Industrial Research in 1926.

Following the death of his wife, Rutherford’s collection of scientific medals was given to the University of Canterbury.

In 1992, new banknotes were designed, featuring famous New Zealanders. Rutherford’s picture was placed on the $100 note. In 2008 an A to Z of New Zealand stamp series released by New Zealand post used Rutherford's image at the centre of an atom for the letter 'R' stamp.

The house where Rutherford was born in Brightwater was demolished in 1921. After years of neglect, the Rutherford Birthplace Project committee was formed to transform the site of original house into a national memorial to Lord Rutherford. The Rutherford Memorial, with information displays about Rutherford in a garden setting, was opened on 6 December 1991.

Ernest Rutherford made three major discoveries that played a large part in the development of modern science and the beginning of the nuclear age: he found out that the structure of elements can change; he developed the nuclear model of the atom which formed the basis of the model still used today; he split the atom. He was both a thinker and a practical inventor, able to develop a scientific theory and then test it in laboratory experiments.

He was a strong supporter of education and scientific research, but was aware of the misuses to which science could be put. During World War I he said he hoped that an efficient way of extracting the energy of the atom would not be discovered until men were at peace again. Before the outbreak of World War II he argued for a ban on using aeroplanes in war.

Rutherford was also quick to recognise the contributions of other research scientists, often beginning research on a topic, then passing it on to a student, but refusing to take any credit by including his own name on the papers publishing the subsequent research. A number of his protégées went on to make important discoveries in their own right.

Rutherford had the ability to produce powerful results from simple ideas, using simple apparatus to prove his theories. Referring to his New Zealand background, he said

“We don’t have the money, so we have to think.”

By testing different elements and finding out which materials could block radiation from reaching a photographic plate, Rutherford concluded that there were two different types of radioactivity coming from the elements. He named the rays after the first letters of the Greek alphabet. Alpha rays are made up of positively charged particles and are slower than beta rays, and can be stopped by a sheet of paper. Beta rays are made up of high speed electrons, or negatively charged particles, and need 6 mm of aluminium to stop them. A third ray, the gamma ray, was later discovered. It is made up of high energy photons, and can only be stopped by 6 mm of lead.

The basic building block of all matter, made up of a nucleus containing one or more protons (positively charged particles) and neutrons (uncharged particles), and surrounded by an orbiting cloud of electrons (negatively charged particles).
Rutherford came up with the earliest version of today’s atomic model when he conducted his gold foil experiments. When he fired alpha particles at a fine sheet of gold foil, he found that some particles passed through the foil, but some changed direction or bounced back. He concluded that the atoms of the gold foil must be mostly empty space around a dense nucleus, and came up with his atomic model.
Some elements such as uranium and radium have so many protons and neutrons in their nuclei that they are too heavy to be stable. Instead the nucleus of one of these atoms will try to shoot off some of its particles (usually in packages of 2 protons and 2 neutrons, known as alpha particles) in the attempt to become more stable.

When an unstable atom spits out or emits from its nucleus a subatomic particle and turns into an atom of a different element. This is also called radioactive decay. Subatomic particles are the particles which make up an atom, including protons, neutrons and electrons.

Also known as nuclear fission. By bombarding radioactive uranium with neutrons it is possible to split the uranium nucleus in half and release huge amounts of energy. As the nucleus is halved, it emits extra neutrons which spin off and split more uranium nuclei, creating still more energy and setting off a chain reaction. This chain reaction can be slow and controlled, as in a nuclear plant producing nuclear energy, or become fast and uncontrolled as in the explosion of an atomic bomb.