Many a Close Run Thing is New Zealand pilot, Tom Enright's reflections on a 45 year career as a pilot. 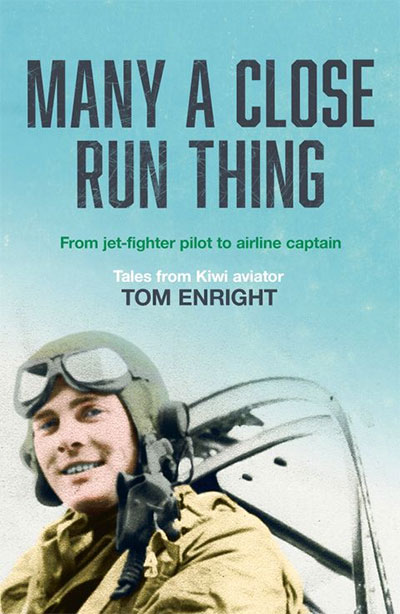 Raised in central Otago during the 1940s, Enright was always fascinated with airplanes and at the age of 16 joined the RNZAF as an engineer. He subsequently trained at the Royal Airforce College in Cranwell, England before returning to the skies of his beloved New Zealand:

"After my years flying in the limited visibility of English skies (before they cleaned up the air), it was astonishing to find typical visibilities of 100 miles in New Zealand and wonderful vistas of our beautiful country."

Enright had a lengthy stint in the RNZAF aerobatic team, during which time he performed a dangerous manoeuvre during the opening of Wellington airport, experienced an engine explosion whilst flying a jet fighter, and even missed his own funeral. He vividly describes one close call during a training flight in Ohakea , as though it happened yesterday:

"Crash! Bang! Clang! I flew through the first three fences and bounced through the first ditch, taking out hundreds of meters of fence line. Wreckage was flying everywhere. On the ground and riding rough, I bounced through another ditch - crash!... But now I saw I was in deep trouble as the third ditch loomed up. Not apparent from where I made the forced landing decision, the ditch was deep with a solid, vertical far side. I couldn't see how I could possibly survive the coming impact and resigned myself - it was curtains for me!... The closer the ditch came, the more the adrenaline pumped and the slower everything seemed to move"...

After 20 years with RNZAF, Enright took on a variety of roles, including flying commander at Wigram air base, flying boat pilot to isolated South Pacific communities, and Air New Zealand pilot for the Electra, and 747 passenger aircrafts. Looking back at his career, Enright says it's a wonder he ever flew again after his very first experience:

"We climbed steadily to about 6000 feet, and I was enthralled with the splendid views of the Taieri River and surrounding farmland. Then without warning, we drove straight down at the earth below.

The pilot, who thought I'd been on several flights in the Tiger Moth, then pulled up out of the dive into a vertical climb and continued into a 30 minute aerobatic routine. We looped, we rolled, we spun down out of the sky and did all manner of things until I scarcely  knew which way was up anymore... The violent manoeuvring seemed to go on forever but at last it was over. We returned to blessed Mother Earth. I was ashen faced".

Enright writes with excitement and passion for his vocation, recalling the highs and near misses, and frequently reflecting that one must "always be ready for the unexpected in the air".

Many a close run thing is a nostalgic romp through a varied career in the skies as well as an intriguing read for someone wishing to embark on a career as a pilot. As Enright concludes: "My wild ride in the vampire taught me that you must never give up but fight every inch of the way through an emergency. Finally, I quote a highly experienced old pilot. He said that when there's the slightest doubt, trust no one, check everything."

Many A Close Run Thing