In Year of the Monkey, poet, writer, rock singer and artist Patti Smith writes beautiful prose with a dream-like quality; inspired by a stay at the Dream Inn.

Year of the Monkey

The National Book Award-winning author of Just Kids and M Train, Smith, approaching the age of seventy, assesses her life and the decline of some of her closest friends. 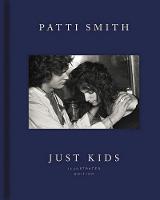 At the time of writing (2016), the 'Godmother of Punk' is still travelling: to familiar and unfamiliar haunts; sometimes hitching (!) around the U.S. to collaborate with friends, often flying across the globe to deliver talks and to perform with her band.

She'll be performing at the Christchurch Town Hall on 25 April 2020, drawn back to this part of the world after a successful tour of Australia in 2017.

The Year of the Monkey's title refers to the Chinese Lunar Year. This is the year that President Trump (who Smith refers to as 'The Trickster') was elected:

Many of the places Smith captures with her words and her trusty Polaroid camera are characterised by their cafés and restaurants. These are the places where she follows the habit of a lifetime; 'scribbling in yet another notebook.' (p.102.)

In California, Smith visits close friend rock critic and producer Sandy Pearlman (Blue Öyster Cult, The Clash) in hospital after a cerebral haemorrhage leaves him unconscious. She begins to write this book while staying at the Dream Inn, her writing acquiring the admonitory influence of its neon sign.

It was Pearlman who encouraged Smith to front a rock band, after hearing her perform her spoken word poetry to guitar feedback played by long-time friend Lenny Kaye.

Later in the year, Smith visits her old friend, ten-time Obie award-winning actor, writer and screenwriter Sam Shepard, living with Lou Gehrig's disease; to collaborate with him on what could be his last work. (This was published as The One Inside, in 2018.)

In M Train, Smith noted that she had promised her late lover, artist and photographer Robert Mapplethorpe (who died in 1989), that she would continue telling their story as long as she lived. In The Year of the Monkey, she finds herself thinking more and more of the past and the afterlife, another dimension of the 'mind messages' she shares with her close friends.

"Dead of winter yet there seemed to be no temperature at all ... I was never so hungry, never so old. I plodded up the stairs to my room reciting to myself, once I was seven, soon I will be seventy. I was truly tired. Once I was seven, I repeated, sitting on the edge of my bed, still in my coat." (p.140.)

Infused with references to art and literature, Smith's writing is very much in the vein of some of her old friends: Burroughs, Ginsberg, Dylan, and alludes to many artists - from Walt Whitman to Johnny Depp's interpretation of the Mad Hatter, Albrecht Durer's woodcuts to the Unicorn Tapestries.

She threads a little mystery into her musing: candy wrappers found by the thousand in strange places and the fate of missing children in the media. Are the two linked?

The book also includes Smith's photography, and a taste of her art on the cover pages. Smith has been represented by the Robert Miller Gallery since 1978.

Towards the end of the book, she celebrates her seventieth birthday. I found myself reading this on the day of her birthday, 30 December. A mind message?