Do you love a whodunnit? I do, so much so in fact I have a serious addiction to true crime podcasts. In between binge listening to dark real life mysteries, I like to come up for air and read something light, bright and breezy ... NO! I like to read thrillers, murder mysteries and yes crime, crime and more crime. So you can imagine my delight when Dervla McTiernan’s new book  The Scholar arrived in the library just as Cyclone Oma was bearing down on us for the weekend. Perfect, a great excuse to curl up on the couch and read. 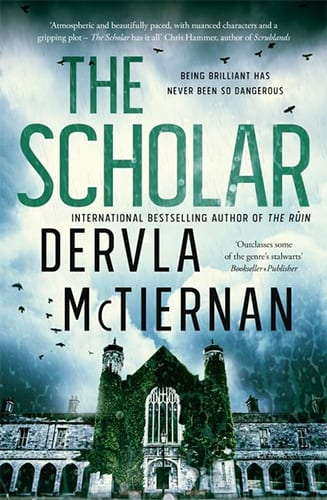 The story grabs you immediately. We are introduced to a young Carline Darcy, super wealthy and the heir apparent to Darcy Pharmaceuticals. That “strange fascination we reserve for the super rich” kicked in, and I wanted to know everything about her — but by page 30 Carline is dead in an apparent hit and run.

The body is discovered late one night by Dr Emma Sweeney, on her way home from work at the highly secretive Darcy Laboratories. She immediately calls her partner Detective Cormac Reilly.

DC Reilly has been much maligned at the station (due to office politics) and has been left working cold cases. Emma’s call makes him the first officer on the scene and ensures he is assigned the case. However Cormac’s running of the case is called into question. The evidence leads back to Darcy Laboratories but is he too close to the case and is it clouding his own objectivity?

This book has everything I want in a novel — twisty turny surprises, interesting characters, and a well-paced plot. What I really enjoyed about Dervla’s characters is that they all come with a back story. Each character's nuances are gradually revealed as the story unfolds. DC Reilly rises above the usual police clichés and comes across as relatable, emotionally intelligent and a methodical investigator. McTiernan has crafted a gripping plot that holds your attention and it is gripping without being a relentless non-stop page-turning thriller that keeps you up all night and leaves you exhausted. One small criticism was that I felt I did manage to put a lot of the pieces of the puzzle together, although it turned out I hadn't managed to guess everything so that was good.

This is my first Dervla McTiernan novel and I’m hooked, I will be hunting down a copy of The Ruin to keep me going until the next DC Reilly instalment, which is due out in 2020

Dervla was born in Ireland and began her career working as a lawyer in Ireland. Following the global financial crisis,  she moved to Australia and tried her hand at writing, with exceptional results. Her short story ‘The Room Mate’ was shortlisted for the Sisters in Crime Scarlet Stiletto Competition. This was followed up with her critically acclaimed bestselling debut novel ‘The Ruin’ which was shortlisted for the 2018 Irish Book Awards. Dervla is now a full time writer living in Perth, Australia with her husband and two children.

I would recommend McTiernan for Fans of Tana French and Jane Harper.