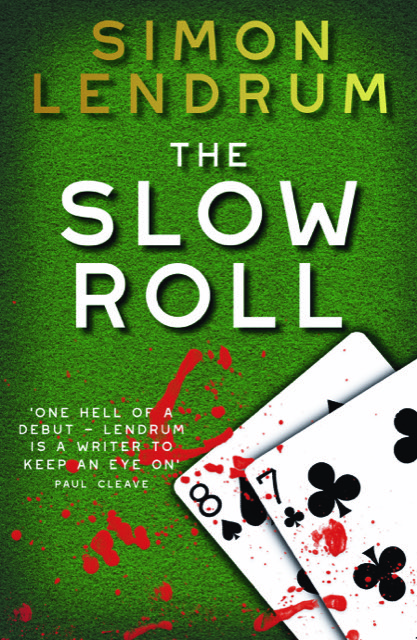 I love it when I receive review copies of books! It's so exciting, opening the parcel, seeing what new treasure has arrived. But I have to admit that when The Slow Roll by Simon Lendrum landed on my desk, I took one look at the blood stained playing cards on the cover, and thought "Nope!"

It seemed there could hardly be a book further from my reading comfort zone than this one. I don't often read murder mysteries, I've never played a game of poker in my life, and quite frankly, casinos are places I'd rather avoid.

So this murder mystery centred around a professional poker player with a chequered past, who spends his nights in casinos, and his days dabbling in detection, really didn't strike me as something I'd enjoy. But, eventually, I started reading anyway. And even when I met O'Malley's walking cliché of a hot, tattooed, bartender girlfriend that he insists on calling baby—I kept reading. And when I read that O'Malley drives not just any truck, but a recent-model Ford Ranger Double Cab, I still. Kept. Reading. Because despite the "baby" and car name-dropping, there was something intriguing and amusing about this book. My first inkling of humour was, in actual fact, the dedication:

To Claire, Jack and Chloe. Thank you for not giggling when I said I was going upstairs to write a book.

That made me chuckle. And it made me push through those bits that grated on my nerves. And by the time I read O'Malley's  poker player buddies' reactions to the news that one of their number had been murdered, I was laughing out loud:

'F*@%. I only saw him a couple of nights ago...He looked so healthy.' That raises a few eyebrows.

'Yeah, yeah, but you know what I mean. Didn't look like he'd be dead in a couple of days, is all.'

I literally died! 😉  This was so hilarious that it completely won me over. And the rest of the book did not disappoint!

"Baby" annoyed me till the very end (the term of endearment, not the character—she turned out to be rather more than just a walking cliché, despite first impressions). But I came to really like O'Malley, especially as more of his backstory was revealed. I enjoyed the side characters too, especially Seargent Buxton, the cop who believes in second chances, and Chattbox the antonymically named gangster, who somehow manages to be hilarious despite having barely a word of dialogue! I loved the kiwiness of the setting, and the story really was intriguing. And it wasn't just about poker, either. In the end, I just couldn't put it down. I was surprised when I read that Simon Lendrum has only lived in New Zealand since 2004, because I really felt that I was reading a Kiwi book, especially with that special brand of humour that I think of as our own.

I'm so glad that this book was pulled from the so-called "slush-pile"! And if there is another story about O'Malley, which I rather think there will be, I'll be sure to read it!

The Slow Roll by Simon Lendrum (Upstart Press) is out now.