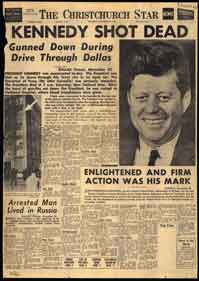 The 23 November 1963 edition of The Christchurch Star newspaper has been digitised. Preoccupation with The Star connection intensified with the release in 1992 of Oliver Stone’s movie JFK, which used, as part of its evidence, the front page of The Star of 23 November 1963.

N.B. times were taken from reports in The Christchurch Star and are New Zealand Standard Time (NZST), and may be different from those reported elsewhere.

In 1960 John F. Kennedy, a Democrat, was elected president of the United States of America. He was the youngest man, and also the first Roman Catholic, to be elected president. Of Irish descent, he was born in Massachusetts in 1917, the son of leading political figure Joseph Kennedy and his wife Rose. After graduating from Harvard in 1940 he entered the navy and served in the Pacific in World War Two (1939-1945).

Back from the war, he became a Democratic Congressman from the Boston area, advancing in 1953 to the Senate. In 1956 he almost gained the party’s nomination for Vice President. Four years later he was the Democrat nominee for the presidency, and won the election by a narrow margin over Republican candidate, Richard Nixon.

His inaugural address is memorable for the words: Ask not what your country can do for you - ask what you can do for your country. His domestic policies involved tax and social reforms and extending racial integration. He established the Peace Corps, presided over the Bay of Pigs invasion in 1961 and confronted the Soviet Union over its installation of missile bases in Cuba. His presidency also saw the beginning of United States military involvement in Vietnam. He was barely past his first thousand days in office when he was killed, the youngest president to die in office.

President John F. Kennedy was assassinated on 22 November 1963 while on a trip to Dallas, Texas. It is alleged that Lee Harvey Oswald shot him from a high window of a building as the president travelled down the street in an open car. Oswald was captured on the day of the assassination but he was never brought to trial. Two days later, as he was being moved by police, Jack Ruby, a nightclub owner and underworld figure, shot him dead

A government commission, led by Chief Justice Earl Warren, decided that Oswald acted alone rather than being part of a conspiracy. Many have since questioned the findings of the commission.

The Christchurch Star reported that the Kennedy assassination took place at 7:00 am (New Zealand time), Saturday, 23 November 1963. Oswald was taken into custody at 8:50 am, at first charged with the shooting of Dallas Patrolman J. D. Tippit. The press knew of Oswald’s being in custody by 10 am and could begin gathering information about him. The Christchurch Star was published in the early afternoon.

Preoccupation with The Christchurch Star connection had existed since 1963 but intensified with the release in 1992 of Oliver Stone’s movie JFK, which put forward a conspiracy view of the assassination. It used, as part of its evidence, the front page of The Christchurch Star of 23 November 1963.

There were claims that The Christchurch Star coverage contained information which was pre-packaged by conspirators prior to the assassination taking place, and distributed in the United States and then sent out to New Zealand very soon after the event. They say Oswald’s background was reported far too quickly and it must have been a CIA-planted cover story.

An episode in the film features ‘Mr X’, identified by Oliver Stone later as Air Force Colonel L. Fletcher Prouty (1917 - 2001). Prouty served in the Pentagon and was shown being sent out of the way to Antarctica by those who had planned the assassination. Played by actor Donald Sutherland, Mr X is seen supposedly buying a copy of The Christchurch Star on the morning of 23 November 1963 at Christchurch Airport.

The Star’s reporting of the assassination

Bob Cotton, Chief Reporter of The Christchurch Star, says that following the release of JFK, The Star received numerous requests from investigative writers, journalists and authors in the United States for copies of the pages of the November 1963 issue. Some conspiracy theorists have made special trips to Christchurch to interview him and there have even been suggestions that The Christchurch Star company was involved. These theories, however, are based on inaccurate assumptions about The Star newspaper’s production.

Bob Cotton was a reporter at the paper at the time and can recall clearly the events of November 1963. He says that even in 1963 global communication was fast and effective, and an assassination of an American President meant that everything and everyone on The Star worked doubly quick. News then came by AAP and various wire services which would have been competing to get the news out to their subscribers.

Photographs were usually wired to Australia, then to Auckland and then to Christchurch. This time, to get the photographs early, some of the geographical links were bypassed through technical ingenuity at The Star. Even so, the paper would not have been published until 1:30 pm or 2:15 — 2:30 pm depending on the edition.

Bob Cotton also explains that every newspaper has a large store of biographical material, and says that Lee Harvey Oswald was not a stranger to the media. Information on him would have been readily available in American newspapers and media offices and would have been sent out quickly. In 1959 there had been much coverage in newspapers about young men defecting to the Soviet Union and Oswald’s defection had been covered in detail in The Washington Post, The Washington Evening Star and The New York Times.

Again it was widely reported when Oswald, now with a Russian wife and child, returned to the United States in 1962. The portrait of him in The Christchurch Star had appeared in The Fort Worth Press on 16 November 1963.

The Christchurch Star yesterday and today

In 1963, most of the material printed in The Christchurch Star was sent from overseas, attributed to wire services and received by teleprinters. It was not checked here but taken on trust from reputable international services. It was handled by sub-editors, not reporters.

Selected articles from The Star are published online.

Web site reporting on The Christchurch Star’s connection with assassination

L. Fletcher Prouty
This site claims that The Christchurch Star published an Extra edition on the morning of 23 November 1963 which is untrue.

Houston, nation shaken by Kennedy assassination
From the Houston Chronicle

About the assassination and conspiracy theories