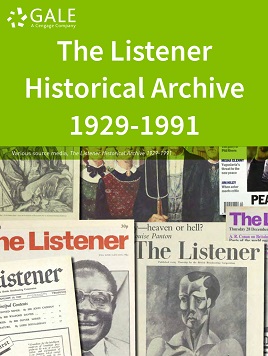 The Listener was a weekly magazine established by the BBC to reproduce and expand on the content of its broadcast and television talks. The Listener Historical Archive 1929-1991 provides an invaluable resource for those researching the arts, politics, science and culture in the twentieth century.

This archive provides complete run of the publication, in an accessible and easy-to-use online research environment. At the heart of the Listener was the BBC’s cultural mission to inform, educate and entertain the general public. Regarded as the premier cultural studies magazine of the mid-20th century, The Listener provides;

The Listener was a weekly periodical established by the BBC under its first Director-General Lord Reith in January 1929. Developed as the medium for reproducing broadcast talks – initially on radio and later on television - The Listener provides researchers with one of the few means of accessing the content of many rare early BBC broadcasts. The first decades of the Listener are particularly significant because live shows were not usually recorded, and tapes of radio shows were usually wiped.

As well as commenting on and expanding on the broadcasts of the week, The Listener also dedicated pages to major literary and musical programmes and regularly reviewed new books and films, providing insights into the critical reception of contemporary and popular culture. The online archive consists of the complete 62 year run of the paper, allowing users to search across 140,000 pages - all newly digitised from originals in full colour.

You can search this eResource through Gale Primary Sources which allows you to simultaneously search many other historical magazines and newspapers at the same time including The Times Literary Supplement Historical Archive.