Fresh out of the box this week is All the Beautiful Girls. This great story is the second novel from Elizabeth J. Church, author of The Atomic Weight of Love. 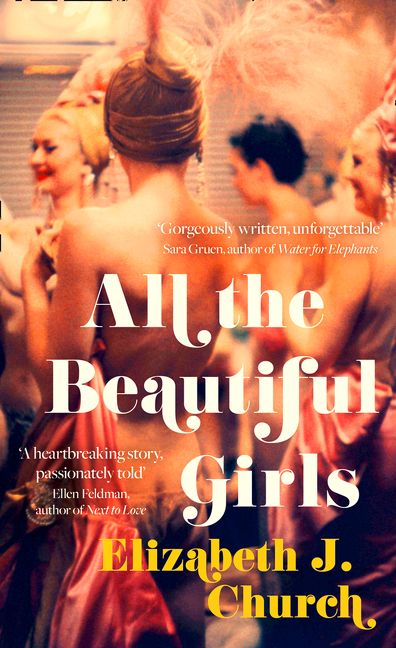 Lily Dekker has had a difficult start to life. Wrenched from idyllic surroundings by a cataclysmic car crash, her family "dissolve(d) like sugar in iced tea".

She is forced at eight years old to start life again with her aunt and uncle; one of whom is less than affectionate, the other overly so.

Dance and an unexpected ally provide her means of escape to Las Vegas,where she reinvents herself; becoming gorgeous Ruby Wilde, a Las Vegas showgirl.

All the Beautiful Girls addresses difficult themes of loss, abuse, self-harm, love and friendship. Around these ideas Church creates a contemplation of life, sprinkled with deep understanding and philosophy:

A soft rain began to fall, dotting the windshield with drops that ran until they randomly joined each other. Is that what people did too? Lily wondered. Fall and drift until they collided with one another, the way the Aviator had collided with her ten years ago? p.56.

Set in the 1960s, the story exists in a whimsical time when everyone smoked, colour TV was a novelty (in-room phones!), and we had TV dinners before we had microwaves.

A  star-studded sixties cast from Sammy Davis Jnr, Dylan to Dinah Shore, parade through the pages of Ruby's colourful and often disastrous life. Filled with thrills, spills and glitter, Church uses the setting of Las Vegas to dig deeper into the politics of the time - racial equality, women's rights, wealth and Vietnam to name a few.

Las Vegas is a fantasy world; a plastic bubble protected from world issues, trapped in time:

"For the first time, she realised that Vietnam cast no shadows beneath the lights of Vegas; there were no flag-shrouded caskets, no hollowed, haunted eyes of returning soldiers anywhere near the casinos. How efficiently Las Vegas seemed to be able to keep hippies away from the Strip, where they might hurt business. ... She'd been living in la-la land for too long."  p.174.

Will Ruby find her way back to the real world? Would it bore her if she did?

I loved Lily/Ruby's wee tips on makeup and fashion, and really warmed to her as a character. Elizabeth J. Church writes beautifully. (I also found myself dancing in the stacks).

If you have never been to Las Vegas, let this book will take you there. Or maybe these ones...

All the Beautiful Girls