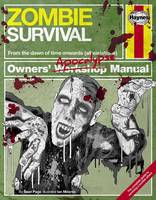 It's Zombie Awareness Month. Do you know where your cricket bat/lawnmower/blunt object of choice is?

No, but seriously, it IS zombie awareness month. What's more, it's nearly over and I haven't even revised my evacuation plan or topped up the first aid kit in case of the Zombie Apocalypse. I deserve to get my brains munched, frankly.

But fear not! For your library is practically overflowing with zombie-related reading and viewing. So here are my picks of the best of the shambling undead.

Board up the windows and hunker down with some reading material -

No actual zombies around just at the moment? Make your own with the following crafty titles -

I think you'll agree that's plenty to be getting on with, but if you've got an hot tips for zombie reading or preparedness please do make suggestions.