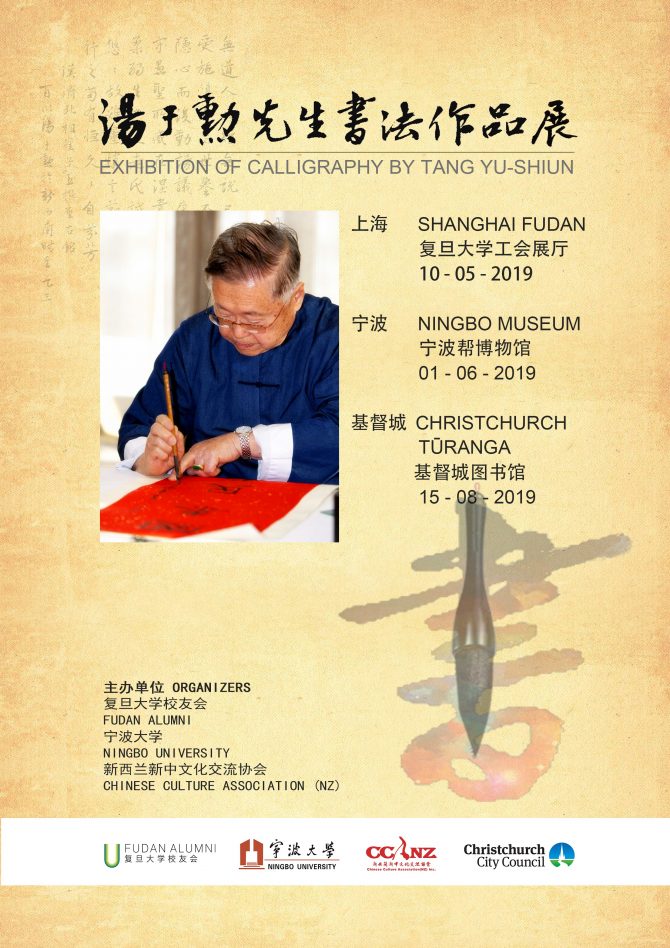 Tūranga is the last stop in a tour of three cities near to Mr Tang Yu-Shiun's heart- Shanghai  Fudan, where he went to university; his hometown in Ningbo City; and Christchurch, where he and his wife Gladys have lived since 1995. Mr Tang Yu-Shiun turns 100 years old this year, and what better way to celebrate than to celebrate his long and illustrious journey as a Chinese calligrapher (among his many other talents: he is also a Peking opera performer, Taijiquan master, and Sinologist) than to come and view his works, and learn the art of calligraphy.

Sunday was such a good day for it too - it actually felt like spring at a balmy 19 degrees! I started by meeting Gladys, who was helping get us all settled before we started, alongside some of Mr Tang Yu-Shiun's students, who would be helping to facilitate the workshop.

We started with an introduction and tour around the exhibition of calligraphic pieces. Mr Tang Yu-Shiun began with a brief introduction, before handing over to his wife, Gladys. Looking at the picture on the above, Gladys explained that the red scrolls were made for her as a birthday present, and the pieces she's pointing to are about the beautiful views from the couple's Christchurch home. There are lots of other items on display in glass cabinets as well, ranging from original source material, calligraphy sets (both pictured below), to a little Chinese-style house made from lego that the boy who made it described as the "calligraphers house".

After the tour, we popped back into the Activity Room to start the workshop. It was truly fascinating! The large group was split into several tables of four people with one teacher. Gladys was the teacher for my group, and explained how calligraphy is taught to beginners. We were each given a special bit of practice calligraphy paper, which has guidance lines on it, and is designed to prevent wasting paper. Now this is the really neat part - you don't use ink on this type of practise paper. All you need is a calligraphy brush and water! When you write on the paper, the water creates black 'ink' lines which fade in a few minutes. So cool!

We also had the different script styles explained to us (Hong's post blog gives a great description), and were shown different examples of each. This was fascinating, since I've only ever done Japanese calligraphy before, which is similar but markedly different.

Next we lost our training wheels and progressed to ink and paper. It's different again writing with ink compared to the water, and I was amazed at how intensely you end up concentrating on it! It's part of what makes it pretty therapeutic - there's no chance to think about anything else, and it makes you focus so intently on your form,  posture, and technique. I found myself  having to correct my posture and the angle I was holding my brush so many times.

Overall, it was a fantastic morning. I learned so much about a different type of calligraphy, art, and culture, and met some awesome people. A big thanks to Gladys for her kind and knowledgeable teaching, Mr Tang Yu-Shiun, and everyone who helped organise and facilitate the workshop.

Like what you hear? Come and meet Mr Tang Yu-Shiun and hear him speak about the exhibition at The Art of calligraphy Seminar, Sunday 15 September, 3-4:30pm.