The City of Brass by S. A. Chakraborty is first in the Daevabad trilogy, set partly in 18th century Egypt. It comprises of two storylines, one featuring Nahri (orphaned Cairo con woman and thief) who accidentally calls down a warrior djinn named Dara and a whole lot of danger; the other featuring devout Ali, prince of the djinn city of Daevabad, who has been inadvertently been funding a potential rebellion against his own ruling family. 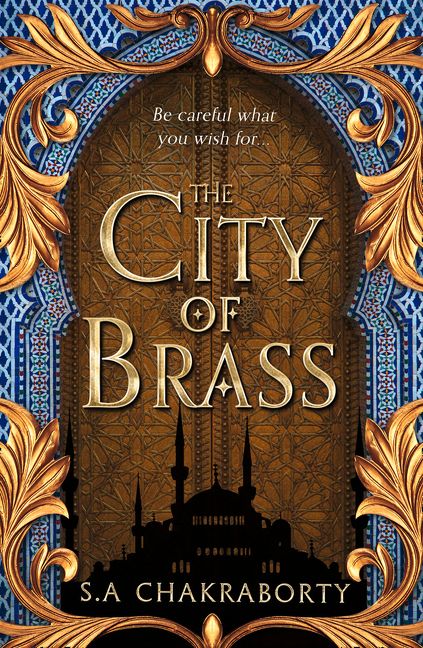 Part of this story is magic and flying carpets and fiery swords, and part is a more nuanced look at what happens when the people of one religion and culture take over the city of another, and how they deal with that over the generations. It's not an uncommon scenario to be in -- the aggrieved Daeva are still seeking reparations for the loss of their sovereignty, and the other djinn are all resentful of what they perceive to be the special treatment given to the Daeva (sound familiar?). At the bottom of the heap are the half-blood djinn, the shafit, resented and mistreated by everybody.

Then there's Nahri, dealing with the discovery that she has some djinn blood as well as the appearance of a temperamental Daeva who's determined to carry her off to Daevabad. Oh, and if they stay too long in one place the undead rise up and come after them, so there's that. Much of the book (possibly a bit too much) is spent on their journey and a slow reveal of Daevabad's history and Nahri's lost family connections, plus a hint of a developing romance between Nahri and Dara. I preferred the conflict of their eventual arrival in Daevabad, where religious and racial tensions rise to a peak and Ali has to finally choose between his morals and his family loyalty.

My only spoiler-free criticisms are that the book is a little slow to get going, and that the many names and relationships between the different types of djinn could be confusing to some readers. Neither of these put me off anticipating the next book in the series (The Kingdom of Copper, hopefully published next year). If you enjoy complex but fun epic fantasy then I would encourage you to give this series a try.

The City of Brass