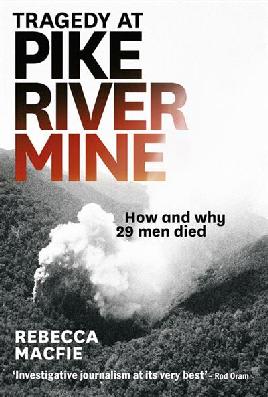 On 19 November 2010, just after 3:44pm, there was an explosion in the Pike River Mine, 46 kilometres north of Greymouth, New Zealand. Over the next ten days, three more explosions took place. Twenty nine miners died in the mine.

The coal mine – which was owned by Pike River Coal at the time of the disaster – opened in 2008.

Two miners, who were near the entrance, were able to walk out of the mine. The remaining 29 miners were at least a kilometre and a half deep inside the mine when the explosion occurred.

Rescue teams rushed to the mine, but didn’t go inside because of the danger of more explosions. The explosion had damaged a gas pipe that was responsible for removing dangerous gases, resulting in a build up of methane in the mine.

Three robots with cameras entered the mine, to try to get more information about conditions inside it. Two bomb disposal robots from the New Zealand Defence Force and one from a Western Australia wastewater company were used, but didn’t manage to get very deep into the mine. Their cameras showed that the mine was very damaged.

The rescue teams were still waiting for conditions to improve so that they could rescue the trapped miners, when a second explosion happened.

The second explosion took place on 24 November 2010 at 2:37pm. After this second explosion, all believed that there was no possibility that any of the 29 miners had survived.

Two more explosions also occurred. The fourth explosion started a fire that could be seen coming out of one of the vents at the top of the mine.

Tests showed that the levels of methane gas in the mine were so great that it was impossible to enter it safely, so efforts to recover the bodies of the miners were stopped.

A public memorial service was held on 2 December 2010 at Omoto Racecourse. It was broadcast live on TV.

Throughout 2011, the families of the victims continued asking for the miners’ bodies to be recovered. In May 2012, after meetings with mining experts, the majority of the families stopped this quest to retrieve the remains of the miners.

A Royal Commission of Enquiry was conducted into the disaster. Some of the people who testified said that safety procedures were not being done properly and that they thought the mine was unsafe. The final report was released to the public on 5 November 2012 and, later that day, Kate Wilkinson resigned as Minister of Labour.

In December 2012, Prime Minister John Key personally apologised to the families of the victims. In an earlier letter to them, he wrote On behalf of the Government, I want to reiterate my apology to the families, friends and loved ones of the deceased men for the role this lack of regulatory effectiveness played in the tragedy.

In April 2013, Pike River Coal Limited was convicted of nine charges of breaching the Health and Safety Act. It was ordered to pay $110,000 to the family of each victim and survivor. It was also fined $760,000.

The Pike River Recovery Agency / Te Kāhui Whakamana Rua Tekau mā Iwa was established as a stand-alone government department by Order in Council on 31 January 2018 to work with the families of those lost in the mine disaster and "to plan for decisions on the manned re-entry of the Pike River mine drift". The Agency is also tasked with gathering evidence on the disaster in order to prevent future disasters. Once the Pike River site has been "rehabilitated" the Agency will be disestablished and the site returned to the Department of Conservation in June 2020.

On 21 May 2019 an Agency recovery team breached the concrete seal to the mine drift, 170m inside the mine entrance. Family of the lost miners were able to enter the mine to this point.

The Agency is currently in the final stages of sealing the mine. The site rehabilitation will then be completed before it is handed over to the Department of Conservation, before the Agency is disestablished.