On Saturday 29 February, Christchurch audiences will be lucky enough to welcome back Jung Chang as she speaks at a WORD Christchurch event (book now!)

The internationally best-selling author, will be speaking about her new book Big Sister Little Sister, Red Sister. This latest biography tells the story of the Soong sisters (born between 1889 to 1898): Ai Ling, (wife of China’s richest man, H H Kung); Ching-Ling, (wife of Sun Yat-Sen, first president of the republic of China), and May-ling, (wife of Chiang Kai-shek, leader of the Republic of China). All three women were major political players in their own right, leaving an indelible mark on their country. The sisters have been elevated to the status of a Chinese fairytale by many, their story running along the lines of: 'Once upon a time there were three sisters. One loved money, one loved power, and one loved her country'.

As Chang shows though, the truth is more complex. As wives and advisors to political rivals, Ching-Ling would go on to try and destroy her sisters' worlds, and all three of them would come to know both privilege and tremendous loss. Chang tells their dramatic stories of love, war, glamour and betrayal, and the stories are both intimate and epic. From China through to Russia and the US, from places of exile in Japan to the headquarters of communist officials, readers are taken on a journey of espionage and political intrigue.

Like many, I first became enthralled by Chang’s writing after reading Wild Swans, the epic saga of three generations of Chinese women - her grandmother, concubine to a warlord general; her mother,  member of the communist elite; and Chang herself, a child of the cultural revolution. The biggest selling non-fiction paperback of all time, Wild Swans has sold over 10 million copies and been translated into 30 languages outside of China (where Chang's books are banned). It isn’t hard to see why Wild Swans became such a literary sensation. Chang’s writing is deeply personal yet epic, gripping as well as informative, at once heartbreaking and uplifting. Its publication was timely, bursting onto the scene at a time when much of China’s turbulent history under communism was shrouded in mystery.

Chang’s next book Mao: the untold story was published fourteen years later, after a decade of painstaking research. It has been called the most authoritative work on the leader ever written, and was born of Chang and her husband's desire to understand the monster behind the mask. Like Wild Swans, it certainly makes for difficult reading with the suffering of a nation, and the callousness of its leader laid bare on each page. 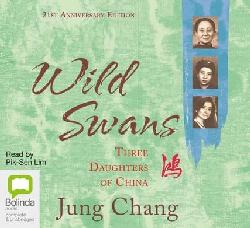 Revealing the distortions of history is something Chang clearly has a passion for. Her book on the Empress Dowager Cixi, concubine turned empress, challenged previous historians who portrayed her as little more than a despot. After examining newly available historical records, Chang portrayed a far more liberated woman who put an end to cruel punishment such as death by a thousand cuts and foot binding; and saw the introduction of modern amenities such as trains and electricity. Whether you agree or disagree with her assessments, Chang always manages to provide a much-needed new perspective on all her subjects.

Of course, when it comes to Jung Chang, the biographer is as interesting a topic as her biographies. Chang's own life almost reads like a fairytale - from a peasant worker living through the horrors of Mao's regime, to best-selling author and the first scholar from the republic of China to gain a PhD at a British university. However, much as Chang loves her home in London she has said many times to interviewers that she still 'cares deeply' about what happens in China. In a  2019 interview with RNZ she also said she still has 'tremendous optimism' for China's future.

Am I excited to hear more from this extraordinary writer and human being? Who wouldn't be!  An evening with Jung Chang can only mean fascinating insights into history, and humanity, and - as with all great storytellers - truly gripping tales.