For the first time this year at Tūranga, Christchurch City Libraries in collaboration with the Christchurch Iranian Society, celebrated Nowruz or Iranian New Year.

It was a busy day on 3 April in Christchurch as the event coincided with the Finals of International Cricket for women. However, it didn’t stop people from coming to TSB space and celebrating Nowruz with us.

Outside TSB Space was the Haft-seen, a table arrangement of seven symbolic items that starts with the letter “S” in the Persian culture. There were symbols of rebirth, fertility, love, patience, health, beauty and sunrise. The mirror was also displayed as a symbol for self-reflection, rebirth and start anew in the new year. Members of the Iranian community proudly displayed their priceless possessions of plates, vase and tea cups which they mostly brought from their homeland.  And people who joined the celebration, stopped at the table and admired the elegant arrangement.

The Chairperson of the Iranian Society in Christchurch, Mehdi Hamedi, welcomed around 60 people who came and had the opportunity to learn more about Iran, its culture and about the Nowruz celebration itself. 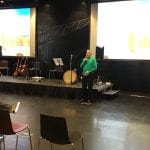 IMG_0089Chairperson of the Iranian Society in Christchurch, Mehdi Hamedi 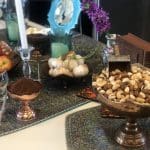 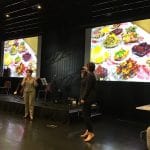 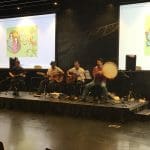 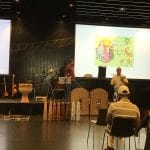 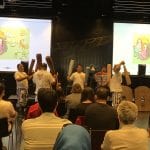 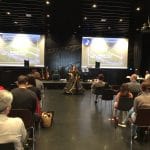 Charming emcees Farahnaz Khosravi and Asal Faraji were both a delight to watch as they told us more about Iran. They categorised it into geographical location, language, weather, architecture, fashion and last but not the least food. Just like in any other culture, the one thing that binds all people together is the love for food and Iran certainly is one of them. If you had the chance to be invited to come to a Persian house, expected to be indulged and spoiled with all their flavourful dishes.

Esmail Fathi and Liam Oliver from Simurgh Music School, a school here in Christchurch, introduced us to different traditional Persian musical instruments such as the Setar, Rabab, Oud and Daf. Afterwards, the audience were treated with enthralling Persian music. The whole room was quiet and audience were truly mesmerised.

Iran is not only popular for its music. And after the performance from Barbad Ensemble, Forough Forutan showcased a traditional Persian dance, the audience were all captivated by the way she danced gracefully and held herself regally.

Last but certainly not the least, was the Canterbury Zurkhaneh. Zurkhaneh also known as a Persian Yoga was recognised by UNESCO as the world’s oldest traditional gym club. They used exercise tools like Sang (Shield) , Shena (Push-up board), Meel (Persian Mace Club) and Kabbadeh (Steel Bow). Dr. Hossein Farraji and with the rest of the members demonstrated how each tool was being used. I tried carrying the Sang (Shield) and I couldn't lift it. It was only 10 kg but I'm out of practice.

Overall, it was another successful event because we were given the opportunity to host the Iranian Community here at Tūranga and they were able to introduce their culture to the users of the library. And with our partnership with the community, Dr Hero Modares of Kia Ora Academy, provided us a list of Classical and Modern Persian Literature to purchase.  The great news from Vicki at Content, we will get another 22 Persian titles, 11 in Adults and 11 in Children, in June. An example of co-design of working together with our community.