Usually in the wide, green land that is Aotearoa, poetry is a minority sport conducted in dark corners of seedy pubs. But not tonight , gentle readers, for the respectable umbrella of the WORD Christchurch Spring Festival has brought those rebels and reprobates of the Catalyst family into the mainstream spotlight. I was astounded at the eager and expectant crowd queuing to witness the black sheep of the genre, the brawling, no-words-barred, competitive milieu of Slam Poetry.

Those stalwarts of Catalyst, Doc Drumheller and Ciarán Fox, were Adjudicator and Slam Master/MC respectively and, as is the Slam custom, five judges were chosen from audience volunteers. Judges hold up scorecards displaying numbers from one to ten with an added option of a 0.5 points scorecard. Audience participation is not only encouraged but demanded. Librarian and poetic star, Ray Shipley, was the "Sacrificial poet" who read a poem so that audience response could be calibrated.

Ten finalists had battled their way through the heats and the rules of Slam are: one poem per round, total time allowed is three minutes a poem, contestants lose half a point for every ten seconds that they run over the time limit, no props nor costumes allowed. Contestants are judged on content, performance and audience response. The winner tonight will go on to represent Christchurch at the National Poetry Slam event (to be held this year in Christchurch).

The running order of the contestants was chosen from a hat and first out of the blocks was Grace with a poem from a daughter to a mother who is disappointed in her. Next up was Barrett with an emotionally fragile poem about body image. The quiver in her voice showed that she was deeply invested in her poem. Rosie, a teen prodigy whose parents both happen to work in the libraries (we breed literate children, what can i say?), read a stunning poem about patriarchal society's view of women. I predict big things for Rosie as her work is already very mature. Andy Coyle, a veteran of the poetry scene, regaled us with a poem about drinking whiskey that had touches of the San Francisco beat psychedelia. Melanie McKerchar gave us a love poem to a woman who may also have been an angel. Joe gave us a rhyme-filled poem about the denizens of Linwood hanging around the local fish'n'chip shop. Hannah, also a young performer, gave us an American parody poem, 3am Anxiety Hour. Hester Ullyart, whom I know in my other life as an actor, gave us a poem celebrating the female spirit. Hester is a RADA-trained actress who hails from Hull in the UK so she definitely had an advantage when it came to the dynamics of performance. Helen read an emotionally searing poem about a mother in an affair giving her true love up for the sake of her children. Nathan Joe, the Ursula Bethell fellow for 2020, closed the first round with a poem celebrating the gay pride of the latest queer generation. The poets covered a lot of ground, subject-wise, in the space of thirty minutes. 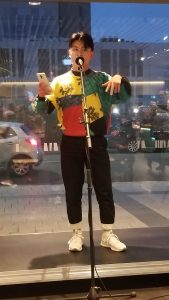 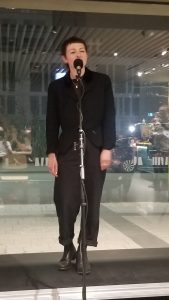 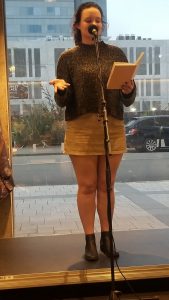 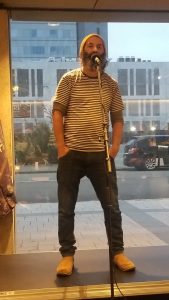 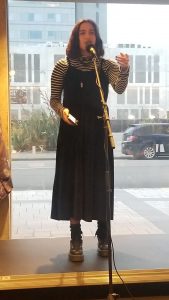 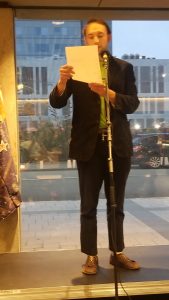 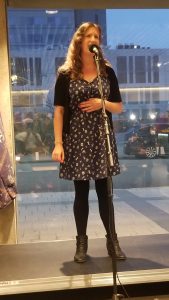 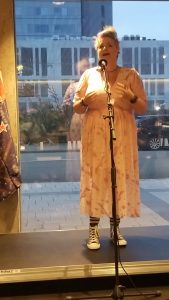 Five poets made it through to Round Two: Barrett, Andy, Mel, Nathan and Hester. Barrett opened with a very funny poem culled from Tinder Bios, a "found poem" for the 21st Century. Andy then recited a satirical poem about the mythical "hard man" of Aotearoa. Mel followed with a celebratory poem of affirmation for the curvaceous women, a sort of up yours to the body image police. Nathan read a tender poem about going to town looking for trouble and finding an unexpected lover. Hester did a love poem using the rooms of a house as the metaphorical framework. Look out for a short film to emerge some time which is based on a 25-minute version of this poem.

And so only three poets could go on to contest the third and final round: Barrett, Nathan and Hester. Barrett opened with a poem with a poem from a budding feminist to a man who is put together by the women he has dated, a poem which unpacked the Princess fantasy. Nathan read a poem called Seven Definitive Answers which deflated the Asian stereotypes often deployed by Pakeha. Hester closed this round with a moving poem about the turmoil wrought by Covid-19 and urged the listener to "cover yourself in hope".

And all too soon, the wild ride was over and Nathan Joe emerged the victor with Hester Ullyart as runner-up and Barrett bringing up a memorable third showing promise of great things to come for this young poet.

The large crowd, some veterans of Slam and many others having their Slam cherry popped tonight, were treated to an exhilarating night of competitive poetry they will not forget in a hurry. Poetry is very much alive and kicking in Ōtautahi.

All photographs by Andrew M. Bell.