We were so pleased that at Alert level 2 we could still run our Craft Snippets session safely. It was a wonderful evening with over 20 people gathered to listen to Hannah Hills talk about her crochet and the path that led her there. The next Craft snippets event will be on Wednesday 26 January paint carver and artist Hannah Jensen.

Hannah grew up in a creative family with lots of sewing, mending and woodworking. Her father would use recovered wood for woodworking. Her mother sewed their clothes and her father knitted and crocheted them cardigans.

Hannah said she made her first project at about age 3 or 4 and can remember sitting with her mum waiting for her sister to finish ballet class and being really excited about this first little felt project. She was allowed to finish it all on her own with scissors (very safe ones) and a big fat very safe needle and remembers feeling extremely proud of her little felt project of a little cushion with a flower on the front.

Hannah has always been interested in colour and putting colours together. Hannah remembers a class project at school. Everyone was given a piece of hessian and told to decorate it to make a gift for Mother’s Day. Hannah spent time thinking about the end picture in her head and created a placemat using coloured thread to create lots of straight lines in different colours. To this day her mother still has this placemat.

Hannah then moved in to sewing and design. With a love for op-shopping, Hannah would use her sewing experience to change clothes around.

Science and maths were Hannah’s favourite subjects at school, she wasn’t really into the Arts. But craft was always important and at age 14 Hannah became sick with chronic fatigue syndrome and Fibromyalgia. As Hannah’s health deteriorated, she did less and less and dropped out of school. Hannah found she couldn’t read and spent most of the time on the couch. Hannah realised this wasn’t good for her mental health so decided to try her hand at crochet. This was something she could easily pick up and put down and having something to work towards really helped.

At this time Hannah tried her hand at pattern making using her Great Grandmother’s book on pattern making from the 1950s. Hannah had it there to show us this precious book. In it there are patterns and measurements of her family, including her now and interspersed with poems. Hannah read us a poem from the book,

Don’t be scared to learn to draft,
It’s the basis of this craft.
Little knowledge is required,
For the style which is desired. 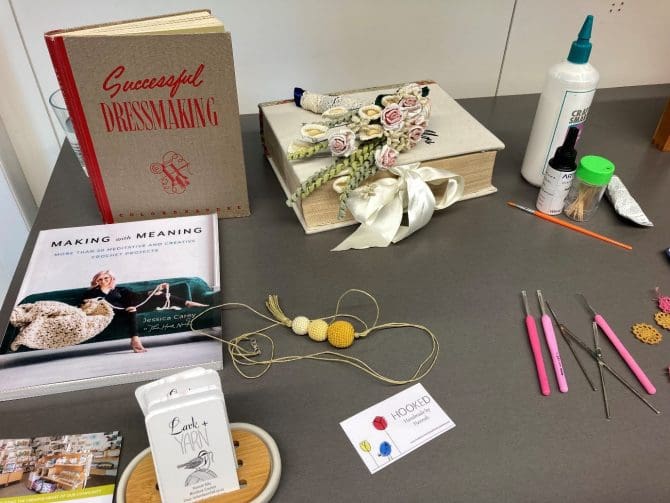 With pattern making Hannah could again use her love of maths. Hannah imagines the image in her mind when she is making something and then works out how to make it. She has made her sister’s wedding dress, friends bridesmaids dresses and used the book to remake her Nana’s wedding dress for herself.

Hannah’s first crochet project was created stitch by stitch, practised over and over which became a beanie which she then gave to a friend. Hannah likes to create with purpose and loves the book ‘Making with Meaning’ by Jessica Carey. The book talks about making with intentions, love, and gratitude. Hannah really feels this resonates with her own journey.

Lark and Yarn (crochet in miniature)

Crochet for Hannah has been an evolving journey. Living at home Hannah has always enjoyed a challenge. Her father would come home with smaller and smaller hooks. Her wedding bouquet (pictured above) took many weeks and was made using a 2mm and 1.5mm hook.

Hannah’s business ‘Lark and Yarn’ came about after she made her mother a necklace by crocheting around beads. She found the inspiration on Pinterest. By the end of her mother’s birthday weekend, she had several orders for more crocheted bead necklaces.

Hannah loves thinking up things to make with the left-over threads and showed us some beautiful studs she makes with a tiny 0.4mm hook. Many of the designs come about from thinking up how to use leftovers. 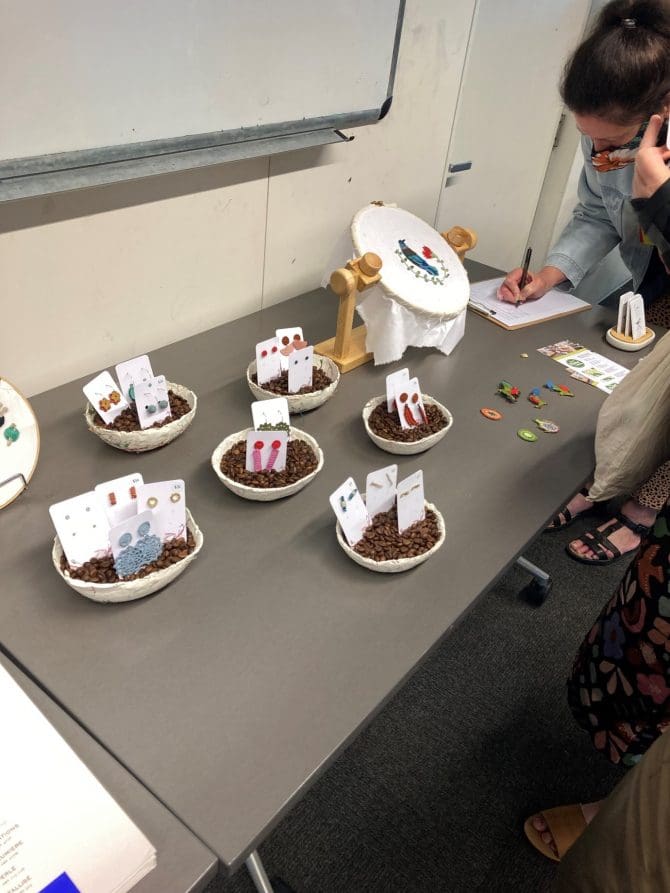 Hannah talked a bit about the process of making her jewellery, which has come about after much trial and error. Initially, Hannah would use fabric stiffener to give the crochet some body. It worked, but not without issues. Hannah found that the pieces weren't heavy enough to dangle, if the piece became wet the starch would come out, and sooner or later the earring backs would come off.

Hannah then found epoxy resin and is quite excited about the benefits it gives to her products. Hannah uses a thin layer of the resin and cures the piece under a UV nail lamp. This sets it straight away. It doesn’t matter if the piece gets wet, the crochet is rigid, it adds weight, and the backs don’t fall off earrings. Hannah sleeps and showers with her studs with no issues. The resin has meant that Hannah can crochet even finer delicate details such as the harakeke flower stamens on her native flower design earrings. For this Hannah uses a 0.05mm hook with a single thread. Hannah brought along some of her hooks to show us. They range from the largest at 1.5mm to the smallest 0.04mm.

Hannah says her work is a continual learning process and always enjoys choosing colours and putting them together. Hannah used to spend ages in shops looking at the embroidered threads and trying different colour combinations. She bought herself a DMC threads sample book, and can now spend hours at home doing the same thing.

Initially Hannah didn’t sell online, she wasn’t interested in repeating products, hadn’t kept track of colours used and found that she didn’t have the energy needed to move online. She has learnt that if she can put her perfectionism aside, set realistic goals, and work out small achievable steps, it is possible to keep moving forward with her business. Hannah now keeps notebooks with pattern charts and colours used. Hannah is thinking about publishing some of her patterns and perhaps running workshops.

Two months ago, after five years of selling her jewellery, Hannah opened her online Felt shop and is learning to use Instagram to advertise her shop.

Hannah found the creative community in Christchurch initially via a shop in Mareihau called ‘Pay it Forward’. This community group transformed into the “Kowhai Collective” and has a shop on the High Street near Little High. The 30+ designers involved are all from Ōtautahi and all take a role in running the shop, supporting each other. The shop prides itself on its high standards, high quality and everything being locally made “really beautiful things”.

Some people asked Hannah questions at the end of her talk. One about whether she uses a magnifying glass, and no not yet, but Hannah said she does need really good light.

A question came up about the cotton Hannah uses. It is DMC or Sullivan’s embroidery thread which Hannah buys at Tom’s Emporium because it is much cheaper there. 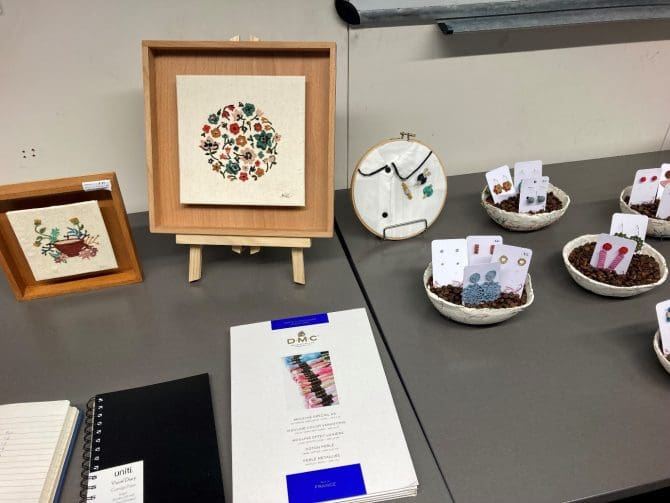 Angela did a round-up of the latest crafty books and magazines in the Library, you can put a hold on any of these.

Sally did a run down of what is happening in the crafty world around Christchurch: