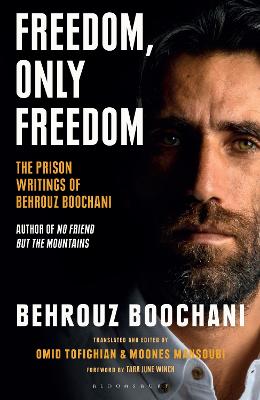 Last Wednesday evening WORD director Nic Low took the stage of The Piano to welcome Kurdish Iranian writer, journalist, cultural advocate and filmmaker Behrouz Boochani back to Ōtautahi for the release of his new book, Freedom, Only Freedom.

In 2019, after six years of being detained on Manus Island, WORD invited Boochani to this city to speak on a one month visa, a pathway which led to him finally being granted refugee status by the New Zealand government and allowed to stay indefinitely.

While incarcerated on Manus, alongside hundreds of other asylum seekers exiled there under an illegal and inhumane policy of the Australian government, Boochani continued his work as a writer. His book No Friend but the Mountains was painstakingly written via Whatsapp in punishing conditions, and highlighted the systemic oppression and injustices borne by refugees held in migrant camps, establishing Boochani as a powerful and deeply humane voice advocating for human rights. His new book, Freedom, Only Freedom - The Prison Writings of Behrouz Boochani compiles many shorter articles he wrote from Manus, and over ten parts traces his incarceration and release. It looks at the prison system from a number of differing perspectives, and features contributions from many others. Behrouz Boochani sat down with Tina Makereti to discuss his work, and conversation traversed a range of thought-provoking themes.

Makereti began the conversation by asking Boochani how he thought about the concept of home, and what it meant to him. He spoke of the importance of feeling connected to place, and the way in which he carries something of each place he has lived with him. As a refugee, one's right to home is taken, the concept becomes obscured through displacement. He also noted the impossibility of anonymity in a small city like Christchurch, and the shyness which accompanied that realisation, having come from a big city like Tehran.

Tina Makereti acknowledged the urgency and importance of the unfolding feminist uprising in Iran, and asked Behrouz for his thoughts on the current situation. He called it remarkable - and thinks it has the power to change both the whole country and broader region, that it will inspire women in other countries too. He argued for the importance of inclusion for ethnic minorities in the revolution, noting that the treatment of ethnic minorities remains "the elephant in the room" for Iran - mainstream society and the media shy away from addressing the subject. Rather, activists for the rights of ethnic minorities are labelled separatists. Boochani's dream for Iran is not for separation, but for a democratic secular system that treats all within it equally. He also acknowledged the complexity, risk and dangerous nature of what is unfolding in Iran.

THE SHADOW OF MANUS

When asked how the experiences of Manus stay with him now he is free, Boochani responded that each person who had that experience has a story, and each story is a tragedy in itself. The shift from Manus to Aotearoa after six years of incarceration, fighting, and writing was sudden - and to be suddenly place which was, in comparison, very peaceful and quiet - proved a significant transition. For Boochani, connection and belonging in a new place happens through contribution, a process that takes time.

Conversation then moved to the concept of kyriarchy, a system of control. For Boochani, Manus Prison represents an original system of kyriarchy, in which a bureaucratic system of complicated process and rules is purposefully in place, designed to dominate, isolate, and force submission of those living under it. Examples of kyriarchy can be seen writ large or small in many areas of society - the bureaucratic and competitive nature of the way in which universities are organised was offered as an example.

In a kyriarchal system such as Manus Prison, time is weaponised. Boochani described still having problems with time - for him now it goes very fast. Time on Manus had a disorienting quality - being a tropical island, there is no differentiation between the seasons, it's always hot, always the same. Boochani thinks perhaps the choice of Manus Island as a prison was deliberate in this way. For the detainees, their experience of time was characterised by a prevailing state of waiting. They didn't know how long they'd be held, and could find no answers. In a state of constant waiting, time moves slowly, there is a paradoxical quality to it.

Boochani went on to speak of the way in which the establishment of Manus Prison on the island impacted upon the indigenous population already living there. The Australian government treated the island as though no-one lived there - using their land as a cage, a place of exile, demonstrating a colonising mentality as they did so. The ecosystem, economy, and society of Manus Island were impacted and damaged, yet the media only talks of the refugees, with little discussion of the impact of the prison on locals. Boochani described how an area of solitary confinement used by the prison was named for a native bird of cultural significance to the local inhabitants, an act of disrespect and disregard.

In a system designed to dehumanise and rob people of the dignity and identity, creative expression can be a radical mode of resistance and the assertion of one's humanity. For Behrouz Boochani, this was writing. He talked about the way in which others found their own ways to be creative in the face of a kyriarchal system - be it planting a seedling, feeding a dog, humour, prayer - each a means of creating beauty, peace and meaning, each a kind of resistance. Joy, humour and love can be radical forms of resisting a system that seeks to strip a person of their humanity. The refugees on Manus, through their stories and experiences, have created a powerful resistance knowledge. Boochani emphasised the critical importance of this knowledge, that is now a part of Australian culture, even if it's not acknowledged as such.

Thank you to WORD for hosting this event - it was humbling and illuminating to be an audience member, and to witness crucial issues of human rights, power and oppression articulated with clarity and profundity by Behrouz Boochani.

Find books by Behrouz Boochani in our collection

No Friend but the Mountains