Captain Underpants is one of the most popular book characters for kids and his books are hardly ever on the library shelves. His hilarious adventures have kids laughing out loud. On Sunday morning at the Auckland Writers Festival, I joined hundreds of Captain Underpants - both young and old - to listen to his creator Dav Pilkey talk about his books. 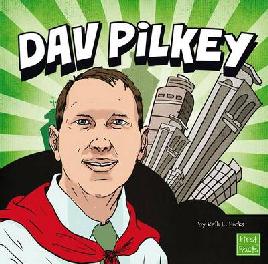 Here are 10 things you may not know about Dav Pilkey and Captain Underpants:

Dav Pilkey's presentation was full of action, thrills and laffs and was one of my favourite sessions of the Auckland Writers Festival.

You too could meet Dav Pilkey in Christchurch this weekend. Dav is going to be talking and signing books at Fendalton School this Saturday 23 May from 12 to 1pm. If you would like to go along you'll need a ticket, which can be collected from The Children's Bookshop.