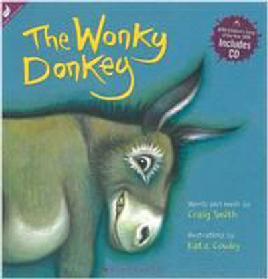 Back in 2008/9, I heard a song about a donkey with one eye, three legs, and a liking for caffeine and country music. It was quite a catchy wee song, and I enjoyed listening to it... which is just as well, because that song was going to be one I heard many more times!

I'm talking of course about Craig Smith's children's song The Wonky Donkey, and its accompanying book, illustrated by Katz Cowley. Together, they collected a slew of awards when they were published - an APRA Silver Scroll for Best Children's Song (2008), The NZ Post Children's Book Award: Picture Book 2010, Nielson BookData NZ Bookseller's Choice Award 2010 among them - and soon children up and down the country were hee haw-ing and winking along in time.

I'd seen Craig busking at the Christchurch Arts Centre before he published The Wonky Donkey, and saw how much the kids enjoyed listening to him - Craig himself says meeting people and making the kids smile was his favourite aspect of busking - and it was neat seeing this 'local' author doing so well for himself.

Inspired by a joke - What do you call a three-legged donkey? A wonky! - this song was everywhere for the next wee while. I spent a year as a teacher aide in a primary school, and whenever I think back to that year, there's usually a soundtrack of 'The wonky song' playing in the background! Even Craig was surprised at how successful it was then, and at its continued success. That success was helped along last year when a Scottish woman videoed her mum, Janice, reading it to her grandson Archer and having a grand old time. 'Janice the Scottish grandmother' went viral, The Wonky Donkey was republished, and a whole new generation of tamariki were introduced to Craig's fun songs and Katz's great illustrations. And now... 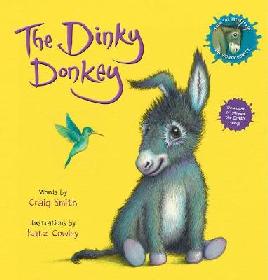 Wonky's got a daughter! Meet the pint-sized, brown-eyed, artsy and musical Dinky, opens a new window! And the book and song are just as catchy, clever, and eye-catching as you'd expect from this duo.

Craig likes writing about animals - cheeky kea, scary animals in the garden, bees, and more - and he's written a few books between the Wonky and Dinky books. They are always brightly coloured with detailed pictures, and are great fun to read and listen to with your young tamariki and whānau members. "My writing is first and foremost about fun. I like to weave little morals ... in here and there, however they always take second fiddle to making the book [and] song fun to read or hear".