Kā Huru Manu is Ngāi Tahu’s satellite atlas. It details thousands of placenames, rivers and histories, and a network of historic trails. Over a dozen of those trails cross Kā Tiritiri-o-te-moana, the Southern Alps. Ngāi Tahu leader and scholar Tā Tipene O’Regan is one of the driving forces behind Kā Huru Manu. Nic Low (Ngāi Tahu) set out to walk the old mountain trails contained in Kā Huru Manu for his new book, Uprising, in an attempt to understand the stories contained in the land.

Tā Tipene and Nic's kōrero was a fascinating journey of  history and story, I watched it from home, and someone else in the lounge stopped playing video games, and leaned in to listen.

Tā Tipene O’Regan talked about reading the landscape. when you travel around the back country, you'll see clumps of isolated tī kōuka - generally a day's walk apart. Ancestors'  footwear were pārahirahi (flax sandals), so at the end of the day people would sit and reboot their pārahirahi for the next day's walk. Camp, sit by fire, tell stories, sleep, and go on.

The travellers may have dug into tap root and make sweet bread, storable and nourishing. Temuka - Te Umu Kaha - the strong oven was a place where they baked the tap roots and separated the meal from the fibre.

This process of knowing names and reading the landscape means:

Nic thought of Kāi Tahu as a coastal people., then wondered "What was the history in the inland places"? He worked for Ngāi Tahu TRONT when he was 19, and started asked questions. This led him to archives manager Takerei Norton. Kā Huru Manu has mapped many of those places, and there are generations of work still to be done with 6000 places waiting to be referenced.

What if we walked the old trails today? Tā Tipene's words before the settlement of the Ngāi Tahu claim:

For Kāi Tahu, peaks are not something to climb up, but to get past - on the way to somewhere. Nic reads from his book Uprising. Nic's mission was to not climb Aoraki, to go only so far and pay respects. He wanted to do a haka to Aoraki, and imagined if Kiwi climbers did a celebratory haka: "Tahu Pōtiki!"

Tā Tipene talks about greeting places by name, reinforcing cultural memory. In Māori tikaka / tikanga, it's rude to ask "Who are you?" You ask about marae /  iwi. You mihi back to the whakapapa of the people of that marae. You greet the people, the tribe, the river.  If you are talking to someone from the Whanganui river, you might refer to "The plaited rope of Hinengākau". The last thing you'll find out is the person's name.

The maps are full of stories, those day-apart tī kōuka, and shelter places because:

It's  pretty chilly business getting round the Southern Alps in no underpants.

Not only were there no warming underthings, there were no pockets. Kāi Tahu transported blades and other precious objects by carrying them round their neck.

There were some more asides:

Tā Tipene talked about the kaupapa of Kā Huru Manu as going looking for history.

Kia ora Tā Tipene and Nic, and also Takerei and the TRONT team who are doing such important mahi. 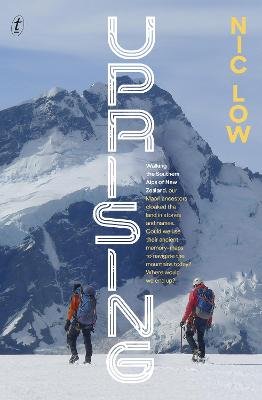