Guest blogger, Nod Ghosh, well-known Christchurch-based Flash Fiction author, writes about her experiences (trying to) attend a Paint n' Pen event at Tūranga. The next workshop is on Sunday 7 July, from 12.30pm to 3.30pm. 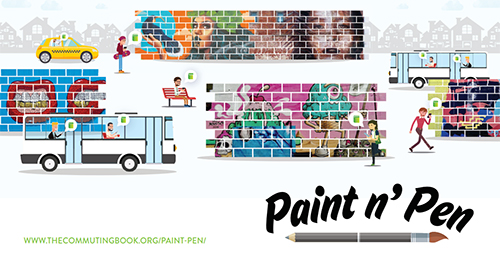 To say the people of Christchurch can be edgy from time to time may not be an exaggeration. We've had our fair share of plague, doom and pestilence over the last few years.

I'm not prone to a nervous disposition, except when it comes to driving. Particularly when driving in a city centre. Driving through any city centre, even my own dear Ōtautahi, I become a gibbering mess, turning left when I mean to go right, stopping in the middle of junctions and mowing old gentlemen with walking frames down at great speed. Okay, I'm exaggerating, but only slightly.

When my writer friend Heather McQuillan tagged me on Facebook to let me know about a series of workshops at Tūranga, I jumped at the opportunity. The Paint n' Pen events are organised by The Commuting Book with the collaboration of The School for Young Writers,  Watch This Space and Christchurch City Libraries.

At the workshop, we would be exploring some of the wonderful street art that has graced our city over the last decade. Afterwards, we'd write words triggered by our experience.

'Perfect', I thought. The combination of art, writing and Heather made complete sense. One of the highlights of this year has been Heather's decision to incorporate one of my 'paintings' into the cover design of her forthcoming flash fiction collection, 'Where Oceans Meet' (Reflex Press). I use 'painting' loosely, as I created the image by throwing diluted acrylic onto canvas. (If it's good enough for Jackson Pollock, why ever not?) Art, a friend and writing would be the perfect way to spend a Sunday afternoon.

So Heather messaged on the Saturday, reminding me to pack an umbrella, as rain poured down in thick torrents.

But why? I messaged back. Surely we would be looking at a slideshow of art around the city?

Not so. We were going to see the real thing, up close and personal. And wet.

I set off in plenty of time, windscreen wipers at top speed, aiming for my 'cheapy' car park. Of course this is Christchurch, so I wasn't fazed by a few road closures as I approached the centre. I still had plenty of time.

By the time I'd been diverted off the third or fourth road and was facing east, with Tūranga and the rest of the city several kilometres behind me, I didn't have quite so much time left. And the rain kept pouring down. We were almost stationary by then, only inching along every thirty seconds or so.

I sent Heather a text.

The radio said nothing about what unfolding catastrophe had caused us to be turned away from the heart of the city.

I sent Heather another text, and wondered if I had anything edible in the Swift. Drinking water was probably more important, though I could probably stick my tongue out of the window and get plenty. But food, I must find food. After all, at that rate, it was going to take three days to get home.

I sent Heather a third text.

By then it was too late. Heather and the other attendees, who had somehow successfully managed to reach the destination, were setting off to look at the street art. In the rain.

Marathon on, she added to the end of her text.

Really? Surely no one would be mad fool enough to run in this weather? They would all drown. No. It had to be something more serious. Perhaps there had been an earthquake, and my trusty Swift had cushioned me from the blows. They're quite robust are those Swifts.

That's when I heard the first siren. By that time, I was actually moving, after having made a dramatic manoeuvre at a complicated junction, almost getting T-boned, as I aimed for the least congested route.

Pulling to the side of the road to let the ambulance and police car whizz past, a sinking gloom enveloped me.

How much more can this city take?

I waited a few minutes before pulling into the stream of traffic again. Surely there would be more emergency vehicles.

I managed to drive home unscathed.

Heather rang me after the workshop, very concerned. Looking back at my panicked texts, I can see why. But there had been no disaster. Only the one in my head.

At the risk of sounding callous, the single ambulance that passed me was probably for a bog standard heart attack, precipitate onset of labour or severed finger. Statistically, those things happen every day. Or maybe it was ferrying one of the marathon runners suffering from hypothermia to hospital.

The Paint n' Pen series runs until October at Tūranga and the New Brighton Library. Who knows, if you go along, you might see me at one of them.

Thank you all who came to our very first creating writing workshop at Tūranga! It was cold outside but warm inside and...

Posted by The Commuting Book on Saturday, June 1, 2019

I might have to have counselling for post-traumatic stress first. 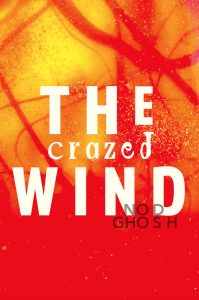 Read Nod's collection The Crazed Wind and visit her website.

Much thanks to the "unseen" participant in this tale, Heather McQuillan, a very successful Flash Fiction author herself. Read her books at the library.