On 15 September Tūranga is proud to be hosting the final event of WORD Christchurch Festival - The Ngaio Marsh Awards Ceremony for New Zealand Crime Writing. 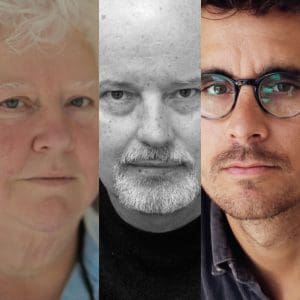 Dubbed Crime After Crime, this years' awards will be held in conjunction with a discussion between four absolute stars of the mystery genre: the toughest dame in crime, Val McDermid; one of the sharpest knives in the drawer, Michael Robotham; the risen star of Kiwi and Aussie Crime, J.P. Pomare ; and the eloquent, fantastic and highly acclaimed Vanda Symon.

They're going to hold their characters under the microscope. These authors write characters who stay with you; made more real with their flawed humanity.

If you're into mystery reading and TV, this will be unmissable.

Oh - and they're going to examine the influence of all this murder and violence on their own flawed psyches, before presenting the winners of the Ngaio Marsh Awards.

Here's a look at the nominees for Best Crime Novel.

Jacqueline Bublitz, Before You Knew My Name - Best first novel and Best novel

Before You Knew My Name

This book has been so popular since its publication that it perhaps needs no introduction. Nominated for a Gold Dagger Award 2021, Before You Knew My Name is ground-breaking because its a murder written from the victim's point of view.

Beautifully executed, with a brooding setting in a New York park, Alice tells her story, full of challenges and ultimately hope, before the life ahead of her, filled with so much promise, is brutally taken away.

Before You Knew My Name also looks at the effect of finding Alice's body on Ruby- a story hardly ever told. These perspectives are usually overshadowed by press accounts shouting the name of the perpetrator, while their victim remains Jane Doe.

Nalini Singh, Quiet in Her Bones

Quiet in Her Bones

One of the best indicators of a book's popularity is whether you can find it on the shelves. Since Psy-Changeling author Nalini Singh began writing mystery novels (this is her second!) I haven't been able to find them on the shelf, they only make it to recent returns, and when I offer them to customers they go quickly.

Quiet in Her Bones is the cleverly plotted murder investigation of a mother - missing for years - found still in her car, swallowed up by the bush in the Auckland Waitakeres. Its a great setting - the bush almost becomes an entity, quietly strangling its secrets, in complete contrast to the lives of the rich, privileged and suspicious characters in their private close.

"I have no doubt we could plot the perfect crime if we had to. It's what crime writers do every day."

The Quiet People follows the terrible misfortune of parents whose young son has gone missing; abducted from his own bedroom. Public sympathy does not side with the parents, who are the cleverest pair of crime writers out of the cutlery drawer.

As Cleave's characters often do, the boy's father Cameron goes rogue in a desperate hunt to find his son and clear his name. The Quiet People is a great read with twists and surprises aplenty and Cleave is as hard on this protagonist as we have come to expect.

Paul has been busy writing another crime novel for release, and adapting his book, The Cleaner, for television.

I can't get enough of these characters. They pop up in the Dark Deeds Down Under anthology too! Once again the action is set in Riverstone, a fictional satellite of Dunedin, mostly in an Air BnB so mouldy you can almost smell it. Uncle Pike and his bf the gregarious Devon are at their hilarious best, tracking down a bomber with the brave Tippy Chan, aged 11. Its exciting and a laugh a minute, with sweary bits and drinking. Not Tippy. Obvs. Inapprops!

Ben Sanders, The Devils You Know

The Devils You Know

Ben Sanders has won the award for Best Crime Fiction Novel a number of times before. And its not hard to see why. He writes a fast-moving, edge of your seat thriller: plenty of action and a lot of heart.

His characters  - Vince is an example - are rounded, imaginable - rugged (but flawed) heroes. The Devils You Know, about a U.S. government man turned protection unit does not disappoint. Unfortunately, looking for a quiet gig in California with a bit of surfing turns into a tangled web of criminal danger. Otherwise it wouldn't be exciting, would it?

And now for something completely different. She's a killer is an eco-thriller set in a Wellington in climate crisis. Water and food are scarce, and God'sown is filling up with Wealthugees. Its a hoot and a weird ride through the mind of main character, Alice, who gets mixed up in a plot to blow up a gated retreat for the rich. She reminds me of Fleabag. Is Alice a killer?

The Ngaio Marsh Awards include Best Non-fiction, Best Youth Novel and Best First Novel too. It's at 6.30 on Thursday evening, and it's not (yet) sold out at the very reasonable price of $23.