The 2020 WORD Spring festival line up has certainly reminded us of the huge talent pool New Zealand has to draw from - from artists like Grahame Sydney and Ralph Hotere, to poets like Fiona Farrell and Philip Armstrong, novelists like Witi Ihimaera and Elizabeth Knox, historians such as Brian Easton, and Martin Fisher, and many many other inspirational figures like Farid Ahmed and Golriz Ghahraman – (the list goes on). 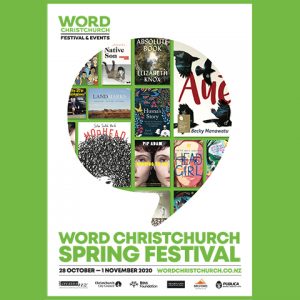 This Friday I’m heading out to two WORD festival events I am particularly excited for.

First up on Friday afternoon, I'll be seeing Carl Nixon and Chloe Lane discussing ‘family ties’ in light of their two latest offerings.

Carl Nixon’s 'The Tally Stick’ is a chilling, suspenseful tale about the Chamberlain family- in 2010 the body of the eldest child is discovered on the west coast, but with only two tyre marks and a tally stick remaining on the scene, the questions lingers- what happened to the rest of the family?

In Chloe Lane’s hilarious and heart-breaking debut novel ‘The Swimmers’, 26 year old Erin must face the unimaginably difficult choice of whether or not to help her terminally ill mother to a merciful death. Read Moata's review of The Swimmers.

This promises to be an insightful evening filled with observations about relationships, humanity, and the art of writing.

Next up on Friday evening, I will be seeing Annabel Langbein discussing her new memoir/cook book ‘Bella’.

With her engaging narrative style, and delicious (and accessible) recipes, Annabel Langbein is New Zealand’s most popular cook book writer, selling over 2 million books in over 70 countries. Her books and tv series have also won multiple awards including Gourmand World Cookbook Awards for Best Entertaining Cookbook, and People's Choice Award for Best Home Chef in a TV Series.

Bella: My Life in Food

Annabel’s life has been shaped and shifted by food- from her hunter forager stage as a late teen, living off the land with friends at the Whanganui River; to starting her own croissant business in Brazil, to life in Lake Wanaka transforming swampy land into stunning gardens and orchards. Annabel not only has some invaluable foodie wisdom to share, but some cracker stories to tell.