I first encountered the work of Pip Adam on reading The New Animals, winner of the 2018 Acorn prize for best fiction. A strange, slippery novel, it struck me in its adept portrayal of inter-generational dissonance, and darkly beguiled in its slinking descent to mermaid-transmutation in the Hauraki Gulf. This year, Adam's latest book Nothing to See was published, and she sat down with Carl Shuker at Tūranga on Sunday to talk process, ideas, craft and place.

Carl Shuker opened the event with words of welcome and words about Pip, her work and style – which he described as unique, spare, highly simplified – as well as sardonic and testing, a kind of writing that sucks you in to strange worlds. Adam, as stated by Shuker - “is punk” – blending simplicity, seriousness, and subversive fun in her fictions. Her work destabilises as it sways between absurdity and gravitas, and this is made manifest in her new book Nothing to See, described by Shuker as "devastating, sad, mysterious and full of ghosts – that makes you laugh, leaves you speechless, groundless, and ultimately moved and grateful."

After this introduction, Adam rose to give a reading from the new novel. The excerpt she chose described the central characters’ quest in acquiring and assembling components for a quiche. It reflected stylistic qualities characteristic of Adam’s writing – stilted, realist dialogue, with "masterful use of the 'um' and an insight into the key device of Nothing to See, that – (spoiler alert!) – the protagonists are doubles, doppelgängers, they are one - but split.

Shuker inquired as to the origins of the idea, and Adam described the feeling that became the incipient idea behind Nothing to See – that she began to have a sense of a double with her, in how she thought about herself in the world. She partly attributed this to the rise in discourse around self-care, and externalising concepts of the self as a means of understanding/tending to oneself – a version of the self you could observe moving through the world. She mentioned themes that obsess her, and that recur in her work – loss, grief, the ways we lose ourselves.

There was then some discussion of sincerity vs irony – Adam described herself as into high emotion, and high romance, but fearful of slipping into sentimentality, which possibly partly accounts for the flat affect of her writing. She spoke of her awakening as a writer in a period of post-modernism, of her obsession with artifice and fakery, and of how she never wants readers to sink into her books and forget that they are, in fact, reading a book – acknowledging that this is annoying, and ‘fair enough’. She attributed her obsession with structure to her hairdressing experience – how short pieces of hair support longer pieces.

The super-literal splitting of the central character/s in Nothing to See, as well as the transformation of Elodie into a sea-creature in The New Animals  feel like life to Adam. She described experiences of being in the world as sometimes feeling like you’re "splitting, sometimes like you’re turning into a sea-monster" and that she hopes one day she’ll understand and feel calm with questions she’s grappling with, of being in a body.

Nothing to See, according to Adam, was forged from her experience of Christchurch – a place she has some history with, where, in 1994, she was thrown against a wall by skinheads, where she’d experienced pain, where she’d been in a time in her life when she’d been damaged - but also a place, she found, where she could become well. That insight freed her to write the book. And, at its core, the novel contains some profound insights relating to this – of growth, and of change.

I found the event a thought-provoking and inspiring insight into process, ideas and the craft of writing. I loved hearing Adam’s talk about her preoccupations, obsessions, and modes of thought, and the ways in which her writing is a means of examining and teasing out that thinking. I’d certainly recommend seeking out Adam’s work – I have Nothing to See underway at the moment and it’s excellent.

I’d been out of town for the week before this event – and exited the venue feeling chuffed and grateful to have returned to a bright, clear Ōtautahi day, that despite this year of turmoil things were alive, and the central city was brimming with ideas, events and engaged folks getting into it – thanks WORD!

Photos from the Pip Adam session 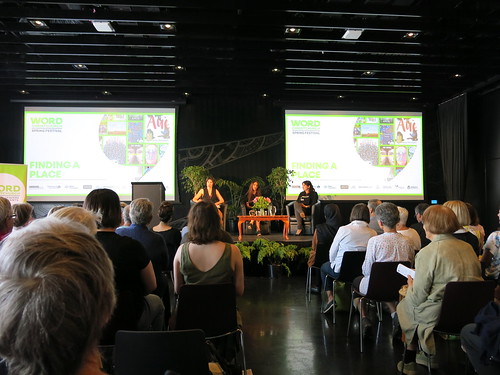