There are no legal suburb boundaries in Christchurch and suburbs are now only general areas of the city. However Bryndwr is generally considered as being the area around Aorangi and Wairakei Roads. It was given its Welsh name (meaning 'on the brink of the water') by Charles Jeffreys who bought 100 acres there in 1880. At the time he also owned Rural Section 188 on the west side of Bryndwr Road. The suburb called Burnside was originally part of a farm of approximately 1700 acres owned by William Boag whose large homestead was close to the present water tower in Burnside Park. It was named for the small creeks forming the headwaters of the Waimairi Stream. 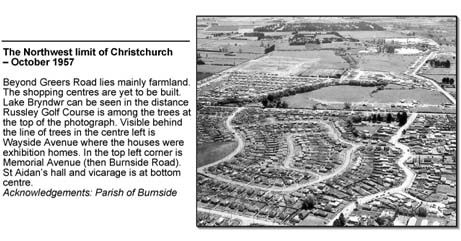 Most of the land in northwest Christchurch which developed into Burnside and Bryndwr was farmed for the first hundred years of European settlement in small blocks given over to sheep, cattle, market gardening and orchards. When it was built in 1878, the Greer homestead (now 302 Greers Road) was a landmark visible for miles.

It was surrounded by a farm which originally covered an area of about 99 acres from Wairakei Road through to Condell Avenue and south to Jennifer Street when roads were just dirt or gravel tracks.

St Winifred’s was another interesting large old house in the area. Joseph Richards purchased four acres from Charles Jeffreys and then built the east wing of the house in 1882. He developed the land into beautiful gardens with lawns surrounding an ornamental lake. George Anderson, the manager of the Christchurch Meat Company, bought the property in 1887 and added the west wing and tower block. Later owners included Mrs Helen Boag and Mrs Lydia Eva Rutherford of Leslie Hills. A nursing home was established there in 1939 when subdivision of the land began. The house was demolished in 1975.

Another building of note in the area is the St Johns Methodist Church at 49 Bryndwr Road which was consecrated in 1927. Built of Halswell stone, it is faced with Oamaru stone in the early English gothic style with a tower in the old Norman style. A memorial lychgate was built at St Johns dedicated to the pioneer methodists of the St Albans circuit to which the Bryndwr Church belonged.

A school established fairly early on in the Bryndwr area was Waimairi School at the end of the School Road (now Tillman Road). It had been a side school of Papanui from 1914 but came into existence in its own right in 1920. One of the problems of the time, mentioned in early school correspondence, was the stray cattle on the gravel roads. Children used to catch frogs in the stream near where Bounty Street is now or in the shingle pit near the end of Taylors Road (now Avenue). Waimairi School had a large number of children from two orphanages in the area – one Presbyterian, the other Methodist.

Both Bryndwr and Burnside were two suburbs in the northwest which experienced rapid growth as Christchurch expanded out from the city centre. This expansion accelerated after World War Two as ex-servicemen returned to settle down and build homes for their families. To cope with this, in the nine years after 1945, almost 12,000 new homes were built around the city and much of Bryndwr and Burnside consisted of new subdivisions either partially or completely built upon, many under the Group Housing Scheme. The area in the 1950s and 1960s was one of the most rapidly growing areas in New Zealand. For a time the former airforce barracks at Harewood were converted into temporary housing for families awaiting a state house which had very strict tenant selection criteria. A news item in The Press of 7 February 1956 announced that "at least 400 houses will eventually be built on an area of 128 acres, 2 roods and 12 perches, south of Lake Bryndwr, which has been taken over by the State… A school site, a shopping area, and a reserve will be incorporated in the new housing area which lies south of Wairakei Road and northeast of Grahams Road." In the immediate post-war years, the local councils of Christchurch had designated various areas on the outskirts of the city as 'green belt' areas and had hoped to discourage residential development beyond Greers Road. Obviously the designation was never enforced.

Lake Bryndwr was the name given to the shingle pits quarried by the Ashby Brothers which provided much of the stone and gravel for Burnside’s drives and paths. There were three pits fed by an underground spring located on a corner block of land of about 20 acres bounded by what is now Roydvale Avenue and Wairakei Road. The main pit, known as Lake Bryndwr, was extremely deep (between 4.5 - 6 metres in depth with its water level related to the level of the Selwyn River), very cold, with lots of weed, and several people drowned in it. Around this main pit was a race track (1.5 miles in length) where midget cars were raced. The lake was used for recreational fishing (brown and rainbow trout) and water skiing. A sawmill was located closer to Wairakei Road. The dragline, used to pull the shingle out of the pits, was moved to the Waimakariri Bridge about 1962. In April 1965 some of the land was purchased by the Roman Catholic Diocese of Christchurch. It planned to use the land to build a church and presbytery on the Wairakei Road frontage but this never eventuated. The pits, filled in around 1968-1970, became a dumping ground.

As well as the State housing development there was a private building boom with six out of ten new houses being privately built. Developers like Maurice Carter, T I Murdoch, Ron Mauger, plus Fletcher Construction, bought large blocks of land and developed sections of between 25 and 40 perches. 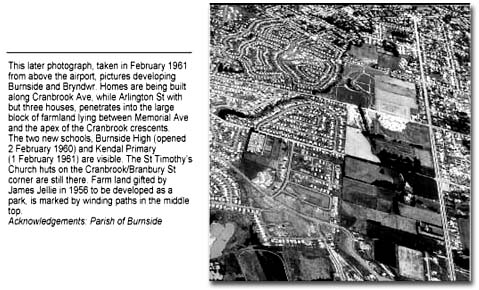 Kendal School was opened 27 February 1962 with 13 classrooms and 481 pupils. There was one state rental area within the school boundaries and no shopping facilities, the nearest being the Greers Road Wairakei Road corner but provision was made for shop sites on sections almost opposite the school gates. Isleworth School opened at the beginning of 1962 and about one hundred children left Kendal to go there.

The Kendal School roll peaked at 866 in 1966, since when there has been a steady decline to fewer than 200. Cobham Intermediate, named initially Fendalton Intermediate, opened in 1963 and five primary schools contributed to its roll.

Roydvale School opened in 1967 with ninety children attending. In its early days it was surrounded by farmland like a country school. Even in the 1960s there was a herd of cows kept in a paddock on the corner of Sevenoaks Drive and Grahams Road. Jellie Park was, up until 1960, a dairy farm of 26 acres. It was gifted to the Waimairi County Council to be a park named after its donor James Jellie.

The number of State secondary schools in Christchurch had increased from eight in 1947 to fourteen in 1961. Among these new schools was Burnside High School, built on just over 24 acres on the corner of Memorial Avenue and Greers Road. The first assembly was held around the historic clump of cabbage trees in the playing fields near Memorial Avenue. These were a landmark for generations of Māori, and later pakeha, settlers and were adopted as the school symbol.

The Roman Catholic Parish of Bryndwr (now St Matthews in Jeffreys Road) celebrated its first mass on St Patrick’s Day in 1950. In 1959 the Anglican Bishop Warren dedicated five new churches, seven church halls and two vicarages in his diocese. Among these was St Aidan’s on the corner of Aorangi Road and Brookside Terrace in Bryndwr. St Timothy’s in Kendal Avenue was dedicated in 1963.

By 1959 the Waimairi County Council realised that a picture theatre was needed to serve Burnside and Bryndwr as thousands of people were now living in easy travelling distance of the proposed site at 401 Ilam Road. The Ilam Theatre opened on 25 July 1960. Built with concrete blocks it seated 530 and was run by Independent Cinemas. By 1969 poor attendances because of television and later hotel closing forced the theatre to close with Wholesale Groceries moving into the building.

Expansion of the Christchurch YMCA’s activities into the suburbs came in 1959 with the construction of a Youth Centre in Greers Road.

The 21st century sees very little undeveloped land left in the area. However Bryndwr, especially, has kept its leafy image with a number of notable trees listed in the City Plan in Bryndwr Road, Flay Reserve and Greers Road. The area has moved away from the urban sprawl development of the 1950s and 1960s and significant housing trends have seen increased infill housing and renovation of existing houses.