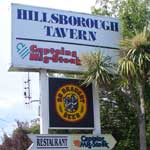 The Hillsborough Tavern was situated on Curries Road, near the intersection with Port Hills Road. Opened in 1972, it was a popular live music venue and one of several suburban taverns built around Christchurch at this time. The tavern closed in 2009 after a devastating fire — this page documents some of the history of this well-known venue.

Growth in tavern numbers in Christchurch

The late 1960s and early 1970s were a boom time for taverns in Christchurch. The introduction of longer trading hours in October 1967 was quickly followed by an increase in the number of taverns. Five years prior to the change in legislation that saw the end of the infamous six o’clock swill there were no taverns in the city — by 1971 there were 34 1.

Many of these were hotels that had undergone a change of status to that of taverns in order to avoid the requirement that they provide accommodation. There was also a move by patrons to drink closer to home in their suburbs rather than closer to their workplaces.

In 1971 there were three major proposals to proceed with three suburban taverns in the suburbs of Avonhead, Burwood and Hillsborough.

The opening of the Hillsborough Tavern

The Heathcote County Council granted planning approval for a licensed tavern just off Port Hills Road in June 1970 2. The company behind this proposal, which included a substantial holding by Dominion Breweries, had an agreement to buy the site from Pacific Scrap Ltd., who traded as a scrap metal operation.

From this inauspicious beginning the Hillsborough Tavern was opened in 1972, managed by Mr and Mrs Killick 3. Patrons were offered a choice of three bars in contemporary seventies design: the Glenelg, the Cashmere Bar and a public bar. A bottle store sold the standard beers and spirits along with newly popular wines such as Cold Duck and Marque Vue. There was an expectation that younger people would make up a large part of the tavern’s clientele.

The Captain’s Mis-Steak restaurant offered a family-friendly, mid-range venue. Steak was a feature of the menu, and families could dine at the captain's table — a raised table on a mock boat.

A Press advertorial informed the reader that the recently opened and strikingly appointed Tavern invites your custom. Ideally situated at the foot of the hill in Opawa Road it’s sure to be a popular rendezvous for entertainment and refreshments 4.

The tavern was decorated with an imaginative colour scheme in the mixed drinking bars. In the past, hotel public bars were the unofficial preserve of males, with women using the lounge bar. Large floor-to-ceiling windows were installed throughout. Red-stained larch wood was used on the walls which contrasted with the orange and yellow drapery. The ceiling featured pagoda-style skylights and clusters of glass bulbs hung from the ceilings. The Rocky Point Bar was styled in more subdued colours and shades of turquoise. The tavern’s exterior was finished in an earth-coloured brick veneer 5.

Music was an important component of the tavern’s success. The popular music group Notation was the Tavern’s first resident group. Their line-up included organ, drums and rhythm guitar with Linda Scott on vocals6.

This was to be the first of many bands to grace the Glenelg Bar’s stage. The stage was fronted by a dance floor area. Two other early bands included the Viscounts and the Four Keys.

The Heathcote County Council’s early and harmonious relationship during the tavern’s planning approval and development stages soon deteriorated. As early as 1973 the Council held serious disquiet7 at the behaviour of drivers leaving the Hillsborough Tavern. In 1983 the council awaited a report from the Fire Service before deciding on action after allegations of overcrowding 8.

Later in that year the council began legal action to have the tavern’s licence revoked. There had been reports of crowds of about 1000 people in the lounge bar which had a limit of 550 patrons 9.

Around that time the Tavern had given an undertaking not to engage touring bands or big bands as there was a view that this was what was causing overcrowding and noise problems. The Council chairperson noted that the Council wanted to ensure (the) peace and quiet to which people have a right in a residential zone 10.

Leading local and North Island bands played at this popular rock music venue. During the 1970s some notable local bands included Notation11, Soul Agents12 and Edge13. Popular resident band Shady Lady dominated the venue toward the end of the decade.14

The tavern continued to cause concern in several quarters as the 1980s rode on. In 1983 women’s groups took issue with the tavern’s “wet T-shirt” contest held in the car park on Boxing Day. The National Organisation for Women expressed their concern that such activities bred “contempt for women and violence against women” 21.

In 1984 an outdoor concert was staged in the car park from 6:00pm. A leading band of the time, DD Smash, enthralled listeners. However many of the local residents were not quite so enthralled and complained of the “pounding noise of more than twice the allowable decibel level”22.

Council officers with the power to enforce noise regulations were on holiday23. Once more the Heathcote County Council applied to the Licensing Commission to have the tavern’s licence revoked.

The waning of the big taverns

Objections from concerned citizens and appeals to the Licensing Commission were not what brought an end to the glory days. The 1990s heralded a new era of licensed restaurants and nightclubs on Oxford Terrace and elsewhere in the city. With this development came the gradual demise of the suburban taverns and hotels as leading venues for night life, music and entertainment.

In the following decade greater disaster was to follow. On 21 September 2009 firefighters attended a “well involved” fire at the tavern at around 12:30am. Nine crew took around four hours to quell the blaze24, which was thought to be suspicious.

The devastating fire consumed the Hillsborough Tavern and brought both sadness and fond memories to many past patrons. A great venue, born of a scrap metal heap, now lay in an ignominious heap of charred scrap. The last dance would be at the wrecker’s ball.

Do you remember this venue?

Do you have memories of going to events or gigs at this venue? We’d like you to share your stories so that we can add to our archive of stories about the development of Christchurch’s music scene. Email us with your story.