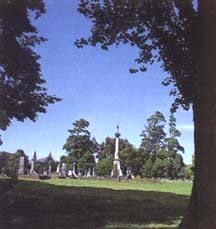 Linwood Cemetery, which was opened in 1884, was the first municipal cemetery of the Christchurch City Council, which at that time had its town belt bounded by the four avenues.

In keeping with international trends of the time, the Cemetery was located on the outskirts of the city, bounded by Butterfield Avenue, Hay Street, Buckleys Road and McGregors Road. It was deliberately established where it was thought the population would remain small and the supposed medical problems caused by a cemetery would be limited.

The cemetery is the fifth oldest surviving cemetery to be established in Christchurch and is an historical record of many early Christchurch residents. The nature of the cemetery means that it is thought that there is a wider cross-section of society buried there than at other Christchurch cemeteries and church graveyards of the nineteenth cemetery.

Linwood Cemetery is the resting place of many ordinary citizens of Christchurch and several notable New Zealanders including Bishop Churchill Julius, the second Anglican Bishop of Christchurch; Thomas John Edmonds and his wife Jane Elizabeth Edmonds of Edmonds Factory fame; and explorer Arthur Dudley Dobson. It has a Jewish section, including graves resited from the 19th century Jewish cemetery in Hereford Street.