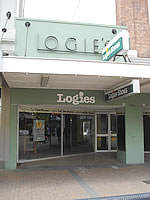 In 2007 John Logie, great-grandson of the original owner James Logie, retired after working for 45 years in the business. None of his family wished to take over so the store, one of the oldest family businesses in Christchurch, was closed.

An advertisement in the Star in 1888 reads: James Logie, Boot and Shoemaker, 230 Cashel Street West (next Zetland Hotel). J. L. begs to inform his numerous friends and the general public, that he has Opened the above Premises, and hopes by strict attention to business and moderate charges to merit fair share of their support.

John Goodman had Goodman's Shoes, a boot and shoe-making business, in Colombo Street where Ballantyne's corner is now situated. James Logie worked there for a number of years and became manager before moving to his own business in Cashel Street.

Boots and shoes for men and women

Logie was a direct importer of all classes of British and Continental boots and shoes and kept all brands in stock. When he first opened his business, footwear was strung on hooks outside the shop. In the window, shoes were displayed in their boxes, row after row, with big price labels attached by clips on the end of each box. Shelves of stock were stacked on either side of the walls, extending from the front to the back of the building. Staff used wooden ladders to reach items near the ceiling.

Four generations of customers and staff

At first, Logie's dealt mainly in women's shoes but, over the years, the stock intake increased to include a substantial amount of men's footwear. By the time the fourth generation of the family took over the shop, it had been completely redecorated three or four times, extended to twice its original size and a 99-year lease signed on part of the neighbouring Zetland Hotel.

Virgin airline founder Sir Richard Branson bought shoes at Logies after getting his feet wet punting on the Avon. He impressed staff and later sent a thank you card. Murray Chestnut worked for 35 years for John Logie Ltd as a shoe buyer, retiring in 1997. His longevity on the job, friendly nature, and approachability earned him the unofficial title of 'Mayor of Cashel Street'.

In 2007 John Logie, great-grandson of the original James, retired after working for 45 years in the business. None of his family wished to take over so the store, one of the oldest family businesses in Christchurch, was closed.

The original James Logie was born in Perthshire in 1834. Little is known about his childhood and youth but family legend says that he was apprenticed at Caragowine, Perthshire. In 1857, aged 22, he married Isabella Strachan, 19, in Errol, Perthshire, Scotland. In the 1861 Scotland census his occupation is given as ‘shoemaker’ of Blackness Road, Dundee.

In 1863 the couple and their children, James, 4, and Mary, 2, left Forfarshire, travelled to London and boarded the Mermaid which sailed 5 November that year, reaching Lyttelton 16 February 1864. The passenger list describes James as a 'ploughman'. He may have thought that his chances of obtaining an assisted passage would improve if he claimed to be an agricultural labourer.

The family lived in Peterborough Street, Christchurch, before moving permanently to 287 Canal Reserve (Linwood Avenue), Bromley. Isabella Logie died 25 July 1899. It is not known whether anyone remained with James during the period up to his death, aged 70, on 9 April 1904. However, after that date Frederick took over his parents' house.

For many years the Logies' house stood on Linwood Avenue. By 1955, with subdivision, street numbers had changed and the house was listed as being at 401 Linwood Avenue. It was owned by Frederick's daughters, the Misses Logie: Jean, who died in 1989, and Mabel (May), who died in 1996. About 1960 several acres surrounding the house were subdivided and Logie Place formed. Photographs of the house have not survived.