The design of the new Sumner Library, Community Facility and Museum has been revealed as the Sumner Redcliffs Historical Society has announced it will contribute $50,000 to the new facility on the corner of Wakefield and Nayland Streets. 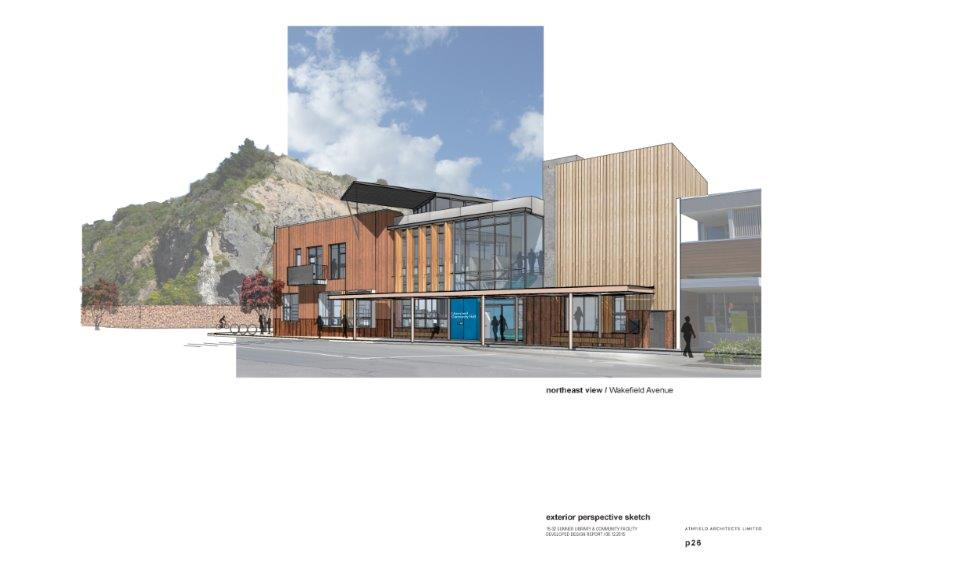 A time capsule that was found during the demolition of the Sumner Community Centre and Museum, which was on the site pre-earthquake along with a library, was also opened this week by Hagley–Ferrymead Community Board and Sumner Redcliffs Historical Society members. The time capsule was found behind the foundation stone in the former museum and contained an old Press newspaper dating back to 27 March 1907, old coins and other trinkets. The contents of the capsule will now be sent to a conservator before a decision is made where to store them.

Christchurch City Council completed a concept design for the building, which was the first phase of the design process, last year. Earlier this year, the Council engaged Christchurch project management firm The Building Intelligence Group, in partnership with Athfield Architects Limited, to work on the developed design. This includes the development of images of what the building will look like from the street (pictured).

The design draws inspiration from the local landscape, incorporating natural timber, the colours of the seaside and architectural features from the demolished Sumner Community Centre.

Hagley–Ferrymead Community Board Chair Sara Templeton says this is a great way to end the year for the Sumner community.

"Work has been full steam ahead this year on the design of the new facility and we're pleased with the progress that has been made, with Sumner residents now able to get a real sense of what it will look like.

"Getting the design to this stage has been a really collaborative process. At the end of 2014, we appointed a Joint Working Group made up of community representatives to have input into the design and the group has played an important part in ensuring the project has made it to this stage."

Opening the time capsule was "really special and very exciting". "Although it hasn't yet been decided what will be done with the contents of the capsule, we're hoping we'll be able to display them in some way in the new facility so the public can see this unique piece of Sumner history."

Andrew McGill, President of the Sumner Redcliffs Historical Society, says the organisation is delighted to be able to contribute to the new facility. The funding will go towards the construction of the museum. "The $50,000 that we're contributing is made up of donations that have been made by members of the society since we lost the museum due to the earthquakes and the proceeds of an insurance claim on the museum contents. We're pleased that we can use the funds that have come from something awful – the loss of our building – to contribute to this wonderful new facility for our residents to enjoy. We're also looking forward to sharing with the community the historic artefacts that have been in storage since they were removed from the damaged museum," he says.

The new facility will incorporate a library, community centre and museum. The library, community office, display area and library courtyard will be situated on the ground floor with the rest of the community functions, hall, kitchen and museum space on the first floor. The final phase of the design process, called detailed design, will begin in January next year and will be completed in April 2016.

Construction of the new facility is due to begin in mid-2016 and it is expected to open in 2017. The work is being completed as part of the Council's Facilities Rebuild Programme.

The former community centre and museum facilities that were on the site were demolished in June 2011 and the library demolition was completed in 2013. A new library and community facility was identified as a key feature in the Sumner Village Centre Master Plan, which was developed in response to the 2010-2011 earthquakes.

Information contained in media releases is correct at the time, but may change after publication. Please check the Library News page for latest updates about library services or contact us, ph: 9417923.