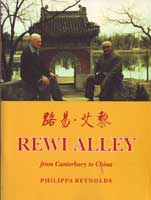 Rewi Alley's parents were Frederick James Alley, a schoolmaster, and Clara Maria Buckingham, who was involved in the temperance and women's rights movement. The baby was given the name Rewi because his father's sister was a great admirer of Rewi Maniapoto, a Māori leader.

Rewi went to Christchurch Boys' High School but he did not do particularly well in his studies.

In March 1917 he volunteered for war service. He was wounded in France and awarded the Military Medal for bravery. He returned to New Zealand, where he farmed in the tough hill and bush country of Wanganui.

Alley was curious about China and travelled there in 1927. He was only planning a visit, but ended up staying there for the rest of his life. For the first ten years he worked in Shanghai. There he met a missionary, Joseph Bailie, and was influenced by Bailie's ideas about the need for schooling and other training in the villages out in the Chinese countryside.

He did not marry, but adopted two boys within five years of arriving in China.

Rewi Alley became involved in flood and famine relief work in his spare time. He saw the hardship and poverty suffered by the Chinese peasants under the rule of the political party in power, the Kuomintang, and because of this became a supporter of the Communist Party.

In 1937 he returned to New Zealand for a short visit, and then toured Europe and North America, looking at conditions in factories there. When he returned to China he helped to set up industrial co-operatives, or schemes to improve working conditions so that all the people worked together for the good of the community. The phrase Rewi Alley used to describe this, "Gung Ho" or "Work Together", eventually entered the English language.

Alley kept on working with the people of China when the Second World War broke out, but found it harder to work with the Kuomintang government. He had to move a school he had started, based on his beliefs about industry, to Shandan, 688 miles away. He worked to set up other schools, known as Bailie schools, to teach the skills needed in his industrial co-operatives.

By now Rewi Alley's work with the ordinary Chinese had become well known internationally, and he was able to get money for it from organisations outside China. After the Communist Party came to power in 1949 his school was gradually taken over by the local Communists who had official positions in the Party. Because of this involvement with the Communists, many New Zealanders were uncertain about supporting Rewi Alley, and many turned against him when he spoke out against American actions during the Korean War.

By 1953 Alley had settled in Beijing and spent his time travelling around China and speaking on behalf of international peace agencies, and travelling to other countries to speak at international peace conferences. Rewi Alley now began writing about China. He also translated some of the work of early Chinese writers, and built up a collection of Chinese pottery and art works, which later found a place in the Rewi Alley museum in Shandan.

When diplomatic relations were set in place between Wellington and Beijing in 1972, Rewi Alley became an important part of the New Zealand government's Chinese policy. In 1982 the government in Beijing made him an honorary citizen of China. He still remained a citizen of New Zealand.

Rewi Alley died on 27 December 1987 at Beijing. His ashes were scattered over the Shandan countryside.

Rewi Alley's work with the ordinary Chinese out in the countryside was well thought of in China because he encouraged the idea of working together for the good of the people, an important part of Communist beliefs. He helped develop ties between New Zealand and China, and became one of the best known and best loved foreigners in China.

What is the Kuomintang?

The Nationalist Party, or Kuomintang, came to power in the south of China in 1917 after revolution and civil war had overthrown the Emperor. By 1925 the leader was Chiang Kai-shek. At first he worked with the Chinese Communist Party, but later turned against them. By 1928 the Kuomintang had united China under one government for the first time since 1916. The government became a corrupt one-man dictatorship, where money could buy influence, and the ordinary people of China were powerless. By the time of the Second World War, the Kuomintang was fighting both the Communists and the invading Japanese. After the war the Communists were able to drive the Nationalists out of China to Taiwan, where they set up their own republic.