The Wizard (Ian Brackenbury Channell) is the self-described "official Wizard of New Zealand", classified by art galleries and critics as a Living Work of Art, designer of the Post-Modern Cosmology, theorist of the Fun Revolution, founder of the Imperial British Conservative Party, role-model for Post-Feminist men, and Metaphysical Engineer”. Locals and visitors alike know him for his Cathedral Square orations.

Ian Brackenbury Channell was born in London, England in 1932. His career path involved time as a Royal Air Force Navigator. In 1963 he obtained a B.A. Double Honours in Psychology and Sociology. After travelling in the Middle East and teaching in Teheran, he became a lecturer, and later a Teaching Fellow, in Australia.

His career as a wizard began in 1969 when he was appointed Wizard of the University of New South Wales by the Vice Chancellor and Students' Union, enabling the continuation of experimental teaching and social reform techniques. The Wizard's living body was also donated to the National Gallery of Victoria as a Living Work of Art.

In New Zealand, he began his career with an oration in Cathedral Square in 1974. His fame grew to such an extent that the Director of the Robert McDougall Art Gallery in Christchurch contacted the National Gallery of Victoria in Melbourne and arranged transfer of Living Work of Art title to Christchurch.

During 1988, The Wizard took on the "tasteless tyrants of Telecom" by repainting the new blue telephone boxes back to their traditional red colour. The battle raged for twelve days, and the Christchurch City Council even got involved - suggesting they might charge rent for the public land on which the phone boxes stood, and voting to supply red paint. Most of the red phone boxes were later sold off, but a few remain, such as the metal one in Victoria Square. Read the Wizard's account of this story. It wasn't just local news either - The New York Times ran a piece in 1988.

In September 1995, with the assistance from the Christchurch City Council, a week of activities took place celebrating 21 years of wizardry in Christchurch. There was a retrospective Living Work of Art exhibition in the city art gallery, a "hatching" from a giant egg, the construction of a large nest on top of the eleven-story University Library, and a Conclave of Wizards from Australia and various parts of New Zealand. 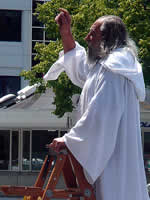 In 2005 The Wizard moved to Oamaru as he retired from his active duties. He still makes speaking appearances in Christchurch.

Some of the activities and issues associated with The Wizard:

We recommend: Resources about The Wizard

The Wizard's site has information on his philosophies, beliefs and activities. There are articles on subjects such as: The Philosophy of Histories, and Transforming Reality. It also features the Proclamation in which he was named Wizard of New Zealand. Read his CV for his life history.
Wikipedia article about The Wizard's history and his move to Oamaru to retire from his active duties.
The Wizard of Christchurch
Brief article from Te Ara - The Encyclopedia of New Zealand
Ian Brackenbury Channell
EBSCOhost articles on The Wizard

Browse the resources in our libraries:

Search the catalogue for material by and about The Wizard