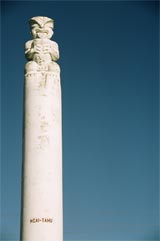 This page features extracts from a recording of Rakiihia Tau speaking about Tuahiwi marae.

Rakiihia Tau (Ngāi Tūāhuriri, Ngāi Tahu) is the Upoko Rūnanga of Tuahiwi Marae. He grew up at Tuahiwi, attending the Native School there and lived in the pā. He passed away in 2014.

As Upoko I have the responsibility for the grace, the charm, and the dignity of our customs that arise from our kawa or protocols.

Translation: We are like unto a Cormorant sitting on a rock. The tide rises, it flows over the rock, and the bird is compelled to fly. Do thou provide a dry resting place for us that we may prosper.

Tuahiwi is a small rural village set amid green paddocks located between Rangiora and Kaiapoi, north of Christchurch. The area has a rich cultural history and Tuahiwi Marae has long provided a focus for not only Ngāi Tūāhuriri and the local community but for the whole of Ngāi Tahu.

Tuahiwi is the home of Ngāi Tūāhuriri and has played a vital role in Ngāi Tahu history. The takiwā (district) of Te Ngāi Tūāhuriri Rūnanga centres on Tuahiwi and extends from the Hurunui to the Hakatere river and inland to the Main Divide. Nearby the famous Kaiapoi Pā was established by the first Ngāi Tahu ancestors when they settled Te Wai Pounamu. Kaiapoi Pā was the major capital, trading centre and point from which further penetration of the South Island occurred so the area is a genealogical centre for all Ngāi Tahu whānui (descendants). Kaiapoi Pā was established by Moki’s elder brother Tūrākautahi who was the second son of Tūāhuriri, hence “Ngai Tūāhuriri” is the name of the hapū of this area. 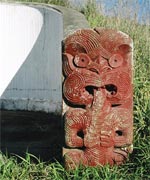 While the principal settlement in the district was at Kaiapoi Pā, smaller inland settlements also co-existed at sites (among others) along the Cam River and at Tuahiwi. Tuahiwi was attacked by Te Rauparaha enroute to lay siege to Kaiapoi Pā. The eventual destruction of Kaiapoi Pā by Te Rauparaha in 1832 rendered the entire area unsafe and the Ngāi Tūāhuriri people fled to the safety of other Ngāi Tahu settlements at Koukourarata and further South. Tuahiwi and other kāinga in the area lay deserted until the threat of war had passed. Many leading Ngāi Tahu families returned to live at Tuahiwi in the 1840s. Māori Reserve lands were later allocated to Ngāi Tūāhuriri whānau at Tuahiwi. From this time, Tuahiwi became the principal area of Ngāi Tahu settlement in North Canterbury.

While Ngāi Tūāhuriri have had an association with Tuahiwi and its environs since the earliest days of Ngāi Tahu settlement, their relationship to that land was altered irrevocably with the arrival of European settlers. The Kaiapoi Māori Reserve was set aside as a place of residence for Kaiapoi Ngāi Tahu as a result of the Canterbury Purchase (Kemp’s Deed) in 1848, which saw the Crown purchase 20,000,0000 acres from Ngāi Tahu for 2,000 pounds. In 1859 Tuahiwi or the Kaiapoi Māori Reserve was the first Māori Reserve, where land was subdivided and title was individualised so as to encourage the building of a township. The reserve was subdivided into blocks which were allotted to specific Ngāi Tūāhuriri families.

Despite the land at Tuahiwi being the largest of the Māori Reserves allocated, it was insufficient for people to generate a living from. In order to survive financially, the land outside the immediate village area was let to Pākehā farmers - by the 1880s this practice had increased to the point that most of the Kaiapoi Reserve was leased out. Through a series of Native Land Acts that followed, Māori land was quickly alienated to Pākehā. Today, much of the original Kaiapoi Māori Reserve is no longer in Ngāi Tūāhuriri ownership.

Ngāi Tūāhuriri and Tuahiwi have always played a major role in Ngāi Tahu affairs as all iwi networks connect back to the Kaiapoi area. Many major meetings, hearings of the Land Court and hearings for the formation of the Ngāi Tahu Trust Board were held at Tuahiwi. In August 1987 the hearing of Te Kerēme, the Ngāi Tahu Claim opened on the Ngāi Tūāhuriri marae at Tuahiwi with a pōwhiri (traditional welcome) to the Waitangi Tribunal.

The landscape around the marae

The landscape surrounding the marae echoes the footsteps of Ngāi Tahu ancestors recognised in oratory, history and whakapapa. The area is the geographical and genealogical centre for all Ngāi Tahu whānui. It was once the gateway for export of Pounamu on account of it being an access route to the West Coast.

The maunga o te marae is Maungatere (Mt. Grey) which lies to the west across the paddocks behind the marae. Ngā Tiritiri o Te Moana (the Southern Alps) form a distant backdrop and the Port Hills lie to the south. From Tuahiwi’s vantage point on the Canterbury Plains all these landmarks and the ancestors and stories they recall are referred to in whaikōrero at Tuahiwi. Tuahiwi’s proximity to the sea is recognised in the name of the Rūnanga Hall, Mahaanui.

Rakiihia Tau speaks about the name of the hall - Mahaanui 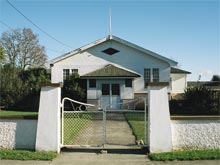 The land on which the present day marae is sited was gifted by three Ngāi Tūāhuriri families. The Rūnanga Hall is called Mahaanui after the famed waka of Maui from which he ‘fished up’ Te Ika a Maui, the North Island. Mahaanui also refers to the tides that run off the nearby East Coast. The hall does not embrace a specific whakapapa but represents and embodies all Ngāi Tahu whānui - all Ngāi Tahu will fit in the canoe of Maui. Mahaanui is therefore an inclusive name which denotes the concept of binding people together.

The hall was opened in August, 1922 during a week-long hui held to discuss grievances over land claims. It was declared open by the Hon. J. G. Coates, Native Minister who received deputations presenting grievances during his visit. The Rūnanga Hall has hosted many dignitaries and important hui particularly in relation to land grievances and Te Kerēme, the Ngāi Tahu claim. The essential purpose of the hall remains as a place where whānau can come together. 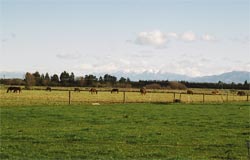 After many years of planning, over a thousand Ngāi Tahu gathered from near and far to celebrate the opening of the new wharenui at Tuahiwi Marae on a beautiful December day in 2012. The old hall Te Maahunui (built in 1922) had been showing signs of disrepair for some time and so was demolished in January 2012. The building project was soon underway (February) and finished over the coming months.

Designed by Ngāi Tahu architect Huia Reriti (MAP Architects) this second north-facing hall is a modern facility that will provide an important base for community activities in the years to come. With great views across the paddocks to Kura Tāwhiti and Maungatere (Mt Grey) in the distance, Maahunui II looks set to stand proudly in Tuahiwi for the people of Ngāi Tūāhuriri. 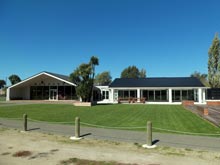 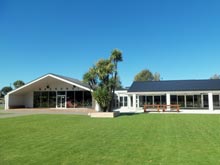 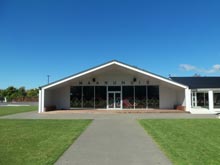 The white steeple of St Stephen’s Church rises up amid tall trees surrounding St. Stephen’s Church on Tuahiwi Road. Christianity has been an important aspect of life at Tuahiwi since the 1850s when it became incorporated into Ngāi Tahu belief systems. The kawa and tikanga of Ngāi Tūāhuriri and Ngāi Tahu underwent great changes with the adoption of Christian beliefs. St. Stephen’s Church was built in 1867 under the guidance of the Reverend J.W. Stack who established a mission school in the area. 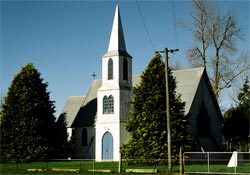 The foundation stone for the kauri church was laid by Governor George Grey on 9 February 1867 amid great ceremony. The entrance to Tuahiwi and route to the church were decorated with flags and arches of evergreen and Ngāi Tūāhuriri people lined the road, giving cheers, hakas and screams of welcome.1 When St. Stephen’s Church was officially opened seven months later in September, Māori from all over the province attended the celebrations.