Information on the clock tower that was initially erected at the southern end of the Provincial Buildings, then moved to the corner of High and Manchester Streets, then later to its current location on Victoria Street.

The Clock tower arrives in Christchurch 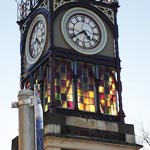 The clock tower was commissioned by the Provincial Council and designed by Benjamin Mountfort. The tower was made in England and received in 147 packages in December 1860. The clock and tower were erected temporarily at the southern end of the Provincial Buildings but proved too heavy for the wooden tower at the southwest corner of the timber debating chamber.

The iron tower stood for nearly three years in the courtyard of the Provincial Buildings while the clock itself was placed in the stone tower in Armagh Street and became the first "town clock". Its face could not be seen but its chimes could be heard on a fine day up to two miles away.

Clock tower on the move

After the abolition of the provincial government system in 1876, the clock was presented to the City Council (at the request of the then Mayor, C. T. Ick) in 1879 and stored in the City Council yard in Worcester Street. It was eventually erected on the corner of High / Manchester Streets in 1897 to mark the Diamond Jubilee of Queen Victoria’s accession – hence the name.

In 1930 it was moved to its present site in Victoria Street. Some restoration took place in 1978. Further restoration including structural strengthening, stonemasonry repairs, refurbishment of the clock, re-roofing and enhancement of the tower’s architectural details was carried out between June 2003 and February 2004.

The clock tower was damaged in the 22 February 2011 earthquake. On Thursday 7 February 2013, the Environment and Infrastructure Committee of the Christchurch City Council recommended it be restored to full working order due to its heritage and architectural significance. It was restored and officially unveiled by Mayor Lianne Dalziel on 22 October 2014.

Images of the Clock Tower 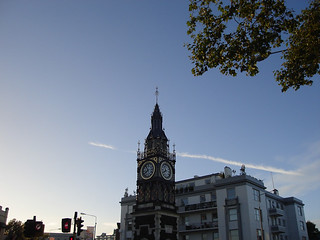 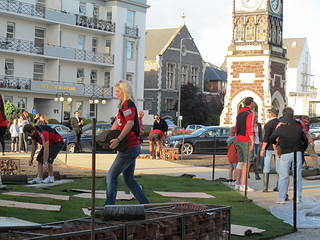 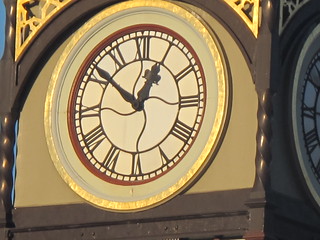 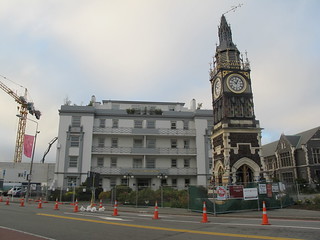